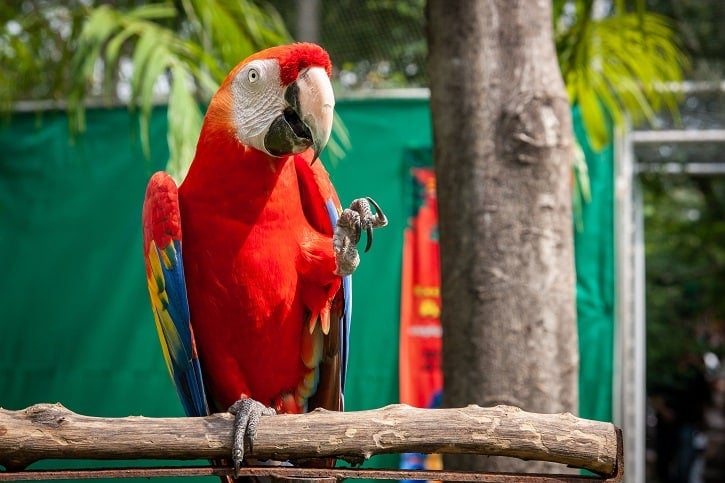 Parrots are fascinating creatures with how they act day in and day out.

Some argue that parrots are some of the most social and unique creatures that we know of.

Whether it’s how they can mimic speech or how they act every day when they’re around us, it’s compelling to see some of the physical characteristics a parrot does so often.

With this in mind, why do parrots stand on one leg?

To answer this question…parrots stand on one leg for a few different reasons, such as calming themselves down, warming themselves up, showing affection, or just wanting to fall asleep. Thus, if you see your parrot standing on one leg, realize there are a few possibilities as to why they’re doing it in the first place. In some instances, it’s possible they injured their other leg, but this isn’t common.

No matter how you look at a subject involving parrots and their ability to stand on one leg, it’s an intriguing matter for us to analyze.

After all, it’s not as if humans are going around standing on one leg to calm ourselves down or to warm ourselves up.

Unless you go to a yoga session, it’s challenging to find a human standing on one leg for any other reason.

Still, there is a lot to unpack regarding a parrot and their ability to stand on one leg.

As a result, we’re going to discuss everything you’ll need to know about the subject.

By the end of it, you’ll have a plethora of information related to parrots and their standing ability.

What Does it Mean When a Parrot Stands on One Leg?

As we discussed, there are a few reasons why parrots stand on one leg.

The first and most vital reason is that it’s a way for a parrot to calm themselves down.

Seeing as parrots can feel overwhelmed very quickly, standing on leg allows them to get a breather and feel back to normal.

Parrots will also stand on one leg as a sign of affection.

This tends to happen when you’re playing with them or giving them love.

Besides trying to relax and showing affection, parrots will also do it if they’re cold since just about any bird can stand on one leg and reduce the quantity of heat lost from the un-feathered part of their body.

Usually, birds outside will do this, but if you happen to keep your home more relaxed than your parrot digs, you might see them stand on their leg for this reason.

Parrots also sleep on one leg when they’re trying to fall asleep.

It’s prevalent to see a parrot stand on one leg when they’re sleepy, seeing as it’s a way for them to get comfortable and sleep better.

Lastly, a parrot might stand on one leg if there’s an injury to their other leg.

This tends to not be common so try not to worry about it all that much.

Why Do Parakeets Stand on One Leg?

Parakeets, also known as budgies, are some of the cutest and friendliest parrots in the entire world, thus making them a prevalent species to adopt.

As you can imagine, budgies stand on one leg quite frequently like so many other parrots.

The primary reason budgies stand on one leg is to relax or feel warmer.

It’s more common for them to do this when they want to relax, but realize it’s possible for them to be cold too.

As a result, make sure you keep wherever they’re staying at an appropriate temperature for them to relax in.

Why Do African Greys Stand on One Leg?

African greys are some of the most sought-after parrots in the entire world, primarily due to their vast vocabulary and too high intelligence.

As for standing on one leg, African greys usually stand one leg as a sign that they want to relax and be left alone.

However, some African greys do it when they’re happy and feel loved.

If you can read your African grey fine, you should be able to tell which is which.

Why Do Cockatoos Stand on One Leg?

Cockatoos are some of the most popular parrot species to adopt, primarily due to the sheer number of cockatoo species in the world.

Cockatoos tend to stand on one leg to give their body rest and to make themselves feel warmer.

Thus, if you see your cockatoo on one leg, make sure the temperature is okay for them.

Why Do Macaws Stand on One Leg?

Similar to cockatoos, macaws are a cultivated and extensive species, with them being one of the largest parrot species in the world.

Macaws stand on one leg like cockatoos to either give their body a rest or to make themselves feel warmer.

As you can assume, make sure the temperature of your home is okay for your macaw.

Do All Parrots Stand on One Leg?

At this point, some of you might be wondering if all parrots stand on one leg.

Technically, all parrots have the natural ability to stand on one leg, but it’s not always the case with every parrot.

If your parrot has an injured leg or something more severe, realize it’s highly likely they could be standing on their leg for that reason.

Is It Okay If My Parrot Stands on One Leg?

If you happen to see your parrot standing on one leg, it’s most likely a completely normal function of their existence.

Whether it’s to warm themselves up or to relax, all of it is quite common in the parrot world.

However, in some cases, there might be an illness or injury, so always make sure they’re okay.

Especially if this is the first time your parrot is doing it since parrots tend to be creatures of habit.

Either way, don’t overreact too much in the matter.