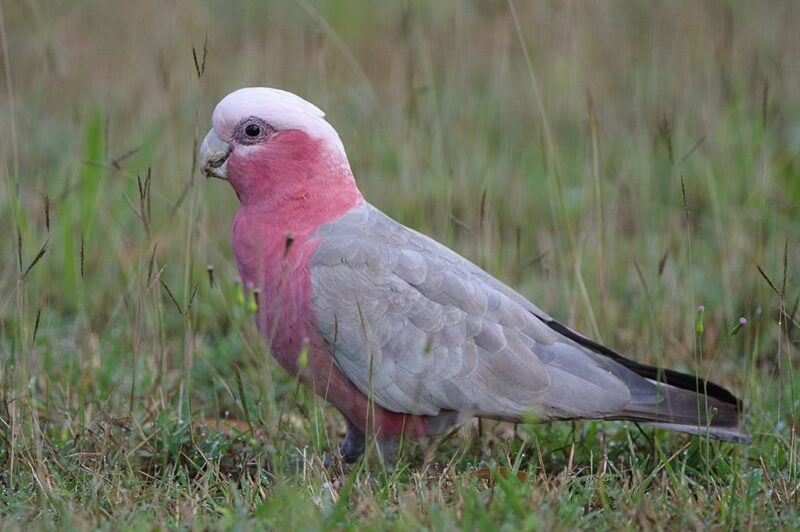 The colors, patterns, and textures we find in nature are nothing short of phenomenal. This is especially true of the bird world, where a near-endless source of bright tones and hues is constantly on display. Parrots, in particular, are well-loved for their brilliant plumage all around the globe.

But have you ever wondered if there are any pink parrots out there? The answer is yes, and I’m going to tell you all about them.

How many types of pink parrots are there?

The most well-known pink parrot is undoubtedly the Galah, also known as the Rose-Breasted Cockatoo. That said, it’s not the only blush-colored member of this family. The Moluccan, or Salmon-Crested Cockatoo, also has pink tones that it loves to show off, as do the Major Mitchell’s Cockatoo and the Corella (Bare-Eyed Cockatoo). Finally, Bourke’s Parakeet represents smaller parrot species with a chest full of dusky pink plumage.

Why are these parrots pink?

Before we explore everything there is to know about these gorgeous parrots, let’s unpack why they’re pink in the first place.

According to PubMed, cosmetic coloration in birds is an evolutionary adaptation that allows them to attract mates. Their bright plumage signals to potential partners that they’re willing and mature enough to start reproducing.

In nature, the color of their feathers can also help them to a) camouflage if necessary and b) ward off potential predators with a dramatic display of their plumage and some intimidating footwork.

Did you know pink is one of the avian world’s rarest colors? This makes these parrots all the more special and unique.

The pinkest parrot around: The Galah

The Galah or Rose-Breasted Cockatoo tops our list of vivid and vibrant parrots.

In appearance, it has vivid shades of pink plumage across its breast and head, with a pale grey back and wings. The pink tone of its plumage is brighter and more saturated than any of the other parrots on our list.

Unlike many bird pairs, males and females share the same coloring but can be differentiated by the color of their irises, which are darker for the boys than the girls.

Good looks aside, Galahs are also extremely intelligent, which makes them great pets. However, be warned, if you’re planning to adopt one, that they can also be highly needy and require at least 3 to 4 hours of attention and interaction daily.

With a lifespan of a whopping 70+ years, a Galah is a big responsibility, but they are well worth it for their loyalty and companionship. They’re also less vocal than many other types of Cockatoos.

The Moluccan or Salmon-Crested Cockatoo is one of the world’s better-known and more commonly bred parrot species.

You may recognize them by their showy crests, which are underlined with bright pink feathers.

Furthermore, they also have pink plumage on their wings and their chests. While predominantly white, this peppered coloring gives them a delightful rosy glow.

Hailing from Indonesia, this beautiful bird is large and incredibly loud. Mature males can grow up to 20 inches (52 centimeters) in length. Females are slightly smaller, around 18 inches (45 centimeters).

In captivity, Moluccans can live for over 75 years. They are, however, very much one-person parrots and form close bonds with their owners, tending to be destructive if left to their own devices. Conversely, with plenty of love and care, they are affectionate, loyal, and cuddly.

Sadly, since 1989, the Salmon-Crested Cockatoo has been listed as a vulnerable species by CITES (https://cites.org/sites/default/files/eng/cop/07/prop/E07-Prop-33_Cacatua.PDF).

This is primarily due to over-capturing for the purpose of sale – a consequence of their remarkable beauty and trainability.

I would describe a Major Mitchell’s Cockatoo as the perfect middleman between the dusky Galah and the bright, light Moluccan.

Its plumage, like a Galah, is reasonably saturated and pigmented, but it is similar in size and stature to the latter.

What sets it apart from both, however, is that with its crest exposed, you’re treated to a fascinating patterning of red and yellow stripes, making it no surprise that this gorgeous species is often described as the most beautiful of the Cockatoos.

Like Moluccans, they’re high-maintenance but rewarding pets and have been known to live for up to 80 years.

While the Little Corella, or Bare-Eyed cockatoo, is not as pink as its bigger cousins, it deservedly makes this list due to its charming rosy cheeks.

At first glance, they seem to be pure white, but in the right light, you quickly notice patches of blush-colored plumage adorning their faces and necks. As their name suggests, they have bare, blueish skin around their eyes.

In stature, they’re smaller than most Cockatoos (only 15 inches / 38 centimeters) but equally intelligent, affectionate, and a little goofy. This makes them great pets, especially for smaller homes. And they love their owners, preferring to spend time roaming and socializing than in their cages.

The Corella’s average lifespan is about 50 or so years, which makes them a big responsibility. However, they are clean and less noisy than many other parrot species, and when properly trained, they make delightful and incredibly loyal companions.

Another rosy Australian native is the breathtaking and bite-sized Bourke’s Parakeet. This lovely little bird has a head, chest, and wings full of dusky pink feathers interspersed with grey.

Unlike the other parrots on this list, Bourke’s Parakeets don’t chat much, learn speech, or perform tricks, but they are wonderful pets that attach to their owners and have sweet and calm demeanors.

Even so, they’re happiest in outdoor aviaries, rather than confined to small cages, purely because they love to fly. And at the end of the day, who wouldn’t want to see swooping streaks of pink flitting around in the garden?

Bourke’s Parakeets are a mere 7 to 8 inches (18 to 20 centimeters) in length but have an impressive 20-year lifespan.

What other types of pink birds are there?

While you can’t keep them as pets, there are a variety of wild pink birds out there too.

The first and most obvious that comes to mind is the American Flamingo, which is famously blush in coloration.

Flamingos aside, have you ever heard of the Roseate Spoonbill? This eye-catching ibis has breathtaking dark and light pink wings that make it look almost cartoonish (so cute!).

We also find the Scarlet Ibis from the same family, although this species leans more to red with pink undertones.

Smaller pink birds include the Rose Robin, with its fuchsia pink chest, and the Northern Carmine Bee-Eater, which has a coral pink body and blue head.

Galahs, Cockatoos, and Parakeets all make great pets and companions, and they are all easy to train.

However, while parakeets are simple to care for and can fare perfectly well in aviaries, Galahs and Cockatoos need stronger bonds with their owners if they’re living in captivity, or else they will become naughty and destructive.

Any parrot is a big responsibility, so make sure to do your research before embarking on this journey. Bear in mind that they also have lengthy lifespans, and require plenty of attention every day, so you will need to be committed to keeping them safe and meeting their needs for many years to come.

Pink parrots like Galahs and Cockatoos are not exceptionally rare (depending on the species and the area you live in). They can, however, be pretty expensive – generally costing upward of $500.

When shopping around for your future pet, ensure you contact reputable breeders or rescue centers with a strong track record of raising their birds in a safe and healthy environment.

You can also read: