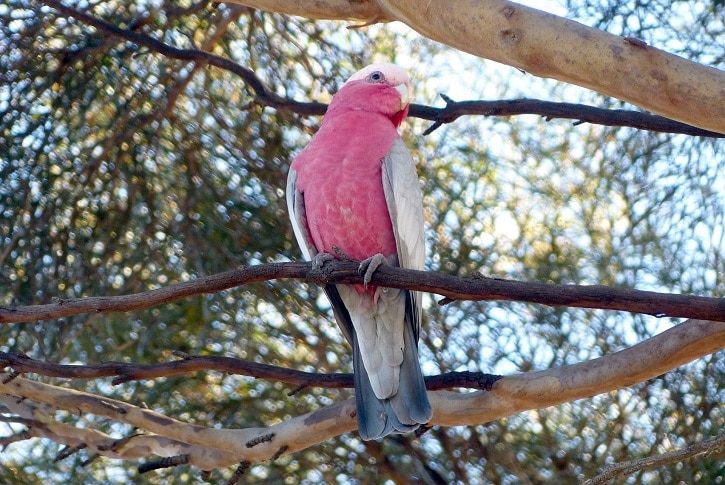 Parrots have emerged as some of the most popular pets to consider adopting for so many people, primarily due to their natural friendliness and intelligence. Plus, there is a fantastic community attached to parrots, filled with countless parrot owners and breeders that sincerely care about the parrot world. Still, there are many varying parrot species, causing many to wonder what a parrot is. With this in mind, is a Galah a parrot?

To answer this question…yes, a Galah is also referred to as a rose-breasted cockatoo and is quite common for people to adopt since they’re so high-energy and friendly. They originate in Australia and are some of the most compelling and unique-looking parrots with their red body, grey wings, and light-colored face.

Now that you know a Galah is a parrot, you most likely have plenty of other questions related to the topic. Considering there is such a vast number of information related to any parrot, it’s no surprise that you would want to learn more about Galahs. Keep in mind, if you’re interested in adopting a Galah, you should definitely read on to ensure they’re the right parrot for you.

Nevertheless, we’re going to discuss what makes a Galah a parrot, the difference between a Galah and a Cockatoo, if Galahs are friendly, if they’re useful to adopt, and much more. By the end of it, you’ll have a solid list of information related to Galahs that you previously didn’t know. Definitely be sure to reach out to local avian vets, pet stores, breeders, and online forums to learn more. Let’s take a look!

What makes a Galah a parrot?

When you first look at a Galah, it’s relatively easy to assume they’re a parrot. Considering most people look at any colorful bird and think they’re a parrot, it’s very straightforward to do this with a Galah. If you assumed this, then you more than likely are thrilled to find out that you’re correct.

Like any other broad species, there is a lot of diversity amongst each species. Whether it’s lifespan, physical, personality, and so on, all of it is idiosyncratic with each parrot. Fortunately enough, there are plenty of traits and characteristics that help identify a bird as a parrot.

For starters, all parrots have curved beaks and four toes on each foot. Their four toes point forward, with two of them going backward. As for their diet, they all eat seeds, nuts, fruit, buds, flowers, and even insects.

Just about every parrot species are found in warm climates, with the most populated areas being Australasia, Central America, and South America. As you can assume, a Galah has every one of these traits as well as a few others that actually makes them a parrot.

What’s the difference between a Galah and a Cockatoo?

Technically-speaking, a Galah is a cockatoo, so the broad species of cockatoo and a Galah share much of the same characteristics. The primary differences have to do with their physical traits, size, lifespan, and personality. The biggest difference you’ll notice is that a Galah is essential, a pink and grey variation of a Cockatoo.

Most Cockatoos tend to be white, thus making it an odd subject to look at a Galah and think they’re one of them. Galah’s are also smaller than white Cockatoos, being 14 inches in length compared to 18 inches on average. Both have a similar age range of roughly 30 to 40 years in the wild and 50 to 60 in captivity.

Friendliness tends to be the most sought-after trait over a parrot, and it makes sense why. After all, you’d want your parrot to be loving and calm when you’re around them instead of being overly obnoxious or mean. Well, if friendliness is what you’re looking for, a Galah is excellent in that regard.

Galahs are extremely friendly and are some of the most loving parrots in the entire world. They love nothing more than to play with their owner and spend time with them. Thus, make sure you do what you can to ensure they get the attention they need. However, Galahs have a strong distaste for cuddling, so be mindful of that when you’re spending time with them.

Are Galahs good parrots to adopt?

Considering we just discussed how friendly Galahs are, it’s easy to assume they’re fantastic parrots to adopt. Although this is true, there are a few points you should be mindful of before you set-out and adopt a Galah. First off, if you don’t have a lot of free time on your hand, a Galah might not be the best parrot for you.

Galahs aren’t necessarily high-maintenance, but they crave love and attention, which are two things you’ll need to give them every day. If you live in a house where someone can be around them on any given day, that’ll suffice. Also, make sure you aren’t overly touchy with your Galah, since they have an odd time with cuddling compared to other Cockatoos.

How big is a Galah compared to other parrots?

Galahs are right in the average size range for parrots seeing as they’re on average 12 inches in length with a weight of 10 to 12 ounces. Still, definitely do what you can to ensure they have a large enough cage and room to live in. No parrot will do well in a cramped area, so do what you can to avoid this when necessary.

How much is a Galah for sale compared to other parrots?

Since Galahs are so unique in their appearance compared to most other parrots, they tend to go for a hefty price. Expect to spend roughly $700 to $3000 USD if you hope to adopt a Galah. Definitely reach out to parrot experts, avian vets, and breeders to learn more.

You may find a deal if you look hard enough, but realize they’re expensive to adopt. Usually, the more exotic looking and sought-after a parrot is, their price sky-rockets as a result. Still, don’t let this hinder your ability from adopting a Galah since they’re such fantastic parrots.