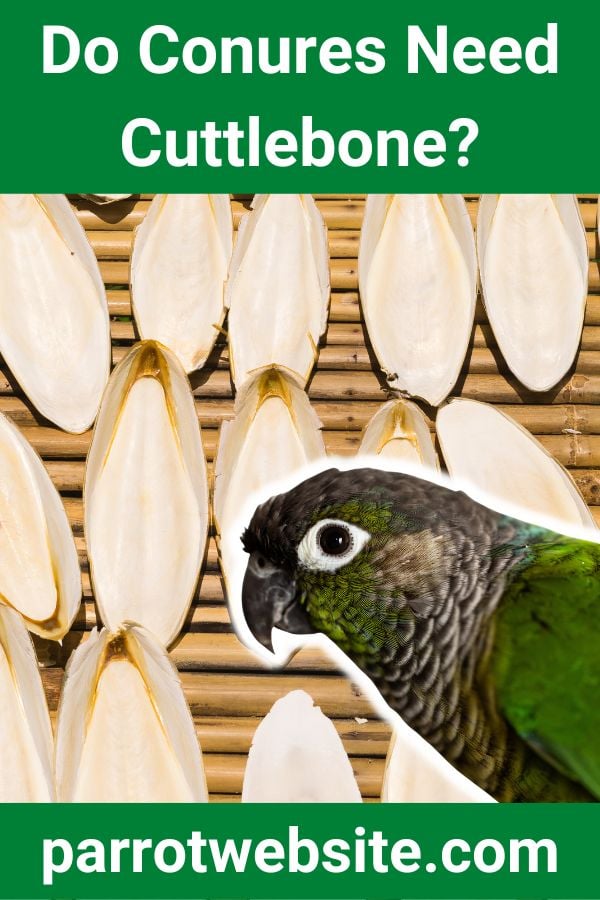 When researching your parrot’s needs, you may have been surprised to learn about the debate over something called cuttlebone.

There is a lot of confusion in the air about what cuttlebone is, why your conures need it or don’t need it, and what it even is to begin with—so do conures need cuttlebone?

Yes, conures should have cuttlebone. It’s really important for keeping their beaks healthy and trimmed down, because they grow constantly like fingernails. Cuttlebone is also a great source of calcium for your conure which their diets are often lacking. Cuttlebone is essential to an all-round healthy conure.

If you’ve never owned a parrot before or you’re just hearing about cuttlebone for the first time, it can certainly sound a bit strange.

There are a great many benefits to giving your conure a cuttlebone, and in fact they are more or less essential to your conure’s health.

To start off with, what exactly is cuttlebone?

Well, you may have heard of cuttlefish.

Cuttlefish are a kind of cephalopod, a marine mollusc in the same family as octopus and squid.

They possess a hard but brittle internal structure, and though the name of the cuttlebone comes from the cuttlefish, all cephalopods have one.

It is in other animals called a gladius.

The cuttlebone itself is composed mostly of a material called aragonite.

It’s chambered and filled with gas, and its purpose is controlling buoyancy.

They are used for a couple of things by humans.

Their carbonate rich raw material makes it great for the production of calcitic lime.

It is also able to withstand very high temperatures, making it great for jewellery making.

It can be used as moulds and casts.

So, why does your conure need something like this?

Are cuttlebones good for conures?

Yes, cuttlebones are great for conures for a number of reasons.

Firstly, and probably most importantly, is that your conure needs something to grind its beak on.

Like your fingernails, a conure’s beak is made of a substance called keratin.

Even once the conure is fully mature, their beak will continue to “grow”, in the sense that it will grow out and begin to peel.

Cuttlebone is widely used as an abrasive surface on which for conures, and indeed parrots in general, to grind their beaks down and stop them from becoming uncomfortably long and peeling.

Hang it up in the cage and your conure will do the rest—parrots are remarkably self-sufficient if you give them all they need!

Beyond that, though, cuttlebone is also a great source of calcium for your conure.

A conure’s diet can generally be somewhat lacking in calcium content, so a cuttlebone is really great for this reason, too.

Of course, they won’t really ‘eat’ the cuttlebone as such.

They will ingest some of it as they are grinding their beaks, and this alone is enough to give them a great calcium boost.

It’s also just something fun and enriching for them to interact with.

Conures tend to love grinding their beaks and find it therapeutic.

Cuttlebone is great for keeping your conure entertained as well as groomed and properly fed, too.

But are there any downsides to giving your conure cuttlebone?

Are cuttlebones bad for conures?

No, cuttlebone is not bad for conures.

While it’s important that they don’t have too much, they’re generally pretty good at self-limiting.

They won’t use it more than they need to, and thus they won’t suffer any issues as a result of having one.

As with any new introduction to your conure’s settings, it’s a good idea to keep an eye on them for a while as you first introduce the cuttlebone.

Again, though, conures are pretty smart, and they will usually figure out what it’s good for right away. If not, it won’t take long.

There’s really no downside to giving your conure cuttlebone, then.

Let’s return to this question of calcium.

In fact, conures and parrots in general are highly susceptible to calcium deficiency due to the nature of their domestic diets.

It can be quite tricky to get the amount of calcium in their diet that they need.

Wild conures eat such a variety of seeds that they don’t have this problem, usually.

Mineral blocks are available for conures, and they can contain enough calcium to boost your conure’s calcium levels.

However, they generally are not as attractive as cuttlebone, and won’t do as efficient a job of trimming the beak down.

You can always employ both. You could have a cuttlebone and a mineral block.

However, as long as their diet is balanced enough, a cuttlebone will provide plenty of calcium for them.

How often should I change my conure’s cuttlebone?

The great thing about cuttlebones from a financial point of view is that they don’t really go bad or spoil.

This shouldn’t be surprising, given its chemical makeup. Its effectively a mineral, and minerals do not spoil like ordinary food does.

So, you really don’t need to change your conure’s cuttlebone until it has finished it.

That said, your conure should always have a cuttlebone.

Ideally, have one on standby so that you can replace it immediately when your conure is done with its current one.

Beyond that, though, you don’t need to worry about giving it a fresh cuttlebone.

It’s a bone! It won’t go bad, and your conure will happily continue to use it until it has more or less disintegrated.

Where do you put a cuttlebone in a cage?

What most parrot owners tend to do is attach the cuttlebone to the side of the cage, so that it doesn’t take up too much space and your conure can get good purchase on it to shave its beak.

If it’s not somehow tied down, then it might move around when your conure tries to use it.

So, attached to the bars of the cage is your best bet.

What can you use instead of a cuttlebone?

If for whatever reason you can’t get hold of cuttlebone where you are, then there are couple of alternatives.

As I mentioned, mineral blocks can be a good way to get calcium in their diet, although they aren’t as good for shaving their beaks down.

You can also use things like calcium powder and limestone flour.

Personally, though, I would suggest sourcing cuttlebones however you can. it’s easy to get them online nowadays, so you should be able to get a supply delivered to you.

What’s the difference between a cuttlebone and a mineral block?

There are a few important differences.

As I’ve mentioned, one of the biggest is the fact that mineral blocks just aren’t as abrasive, and thus aren’t as good for keeping your conure’s beak maintained.

And your conure will need to maintain its beak—a very long beak can become uncomfortable very quickly.

Mineral blocks might provide a broader range of nutrients, but your conure should ideally be getting most of the minerals it needs in its ordinary diet.

Calcium is the tricky part, really.

Mineral blocks are not without their advantages, but for my money, a cuttlebone is better in more or less every way.

How do you attach a cuttlebone to a bird cage?

Tie the ends of the cuttlebone to the cage bars, between two vertical bars.

You can drill holes in the cuttlebone—it may even come with holes already drilled—to push the zip ties through to attach it as tightly as possible.

Some people prefer to put the cuttlebone in vertically from the top of the cage.

This can make it a bit trickier for your conure to get at, though, so it wouldn’t by my preferred choice.

Otherwise, you can simply place it at the bottom of the cage.

Again, though, I wouldn’t suggest this—it really needs good purchase to get the most out of it, so you’ll want to tie it down.

Cuttlebone comes with a huge range of benefits for your bird’s health, then.

So much so, in fact, that they really shouldn’t do without them.

Whether it’s the dietary benefit of the calcium and the digestive aid, or the fact that it allows your bird to keep its beak maintained, cuttlebone is essential for a healthy conure.

Make sure they always have one!