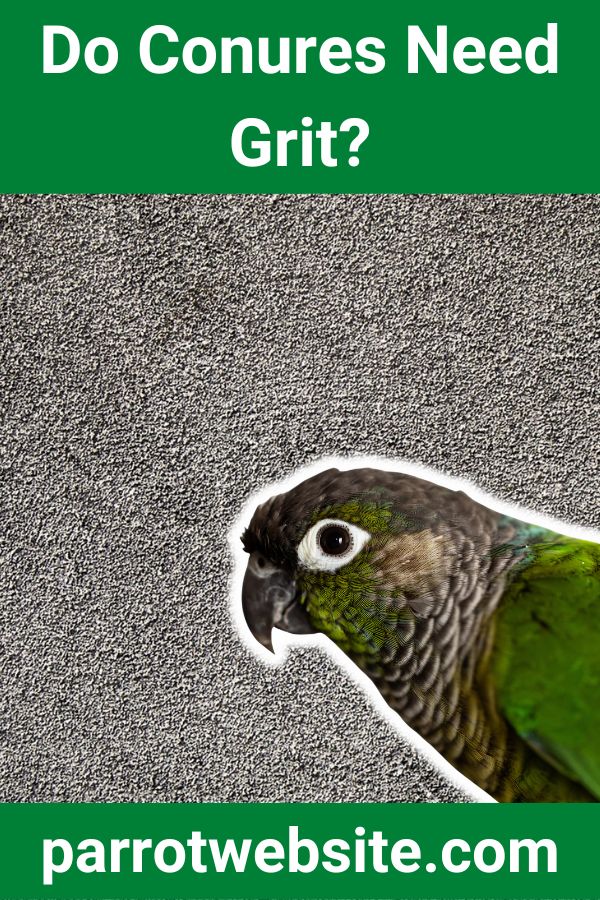 For a long time, the advice to parrot owners was that it’s necessary for them to have grit in their diet.

The idea was that harsh material was needed in the bird’s gizzard to break down tough food, as many other living animals do today.

But do conures really need grit?

No, conures do not need grit. The idea that eating grit is necessary for them to digest their food is outdated and has since been shown to be false. In fact, eating grit can be problematic for a conure for obvious reasons. Do not give your conure grit—just something to sharpen its beak on.

Parrots have been popular pets for centuries now, so a lot of advice about their care has come and gone over the years.

The idea that grit is essential for the digestion of their food is in part due to the fact that there are many extant animals, as well as many which have since gone extinct, which use grit and stones to break food up in their gut.

Do conures need gravel or grit?

They are perfectly capable of breaking down their food without the aid of external materials.

This was the reason that grit was suggested for parrot owners for a long time, not even just for conures.

It was thought that conures needed something hard and abrasive to grind up their food in their gizzard.

More on what a gizzard is shortly.

There were a couple of reasons why people thought this was the case.

On the one hand, conures, and birds in general, lack teeth.

This led people to wonder how they were able to break down food, since they cannot masticate as we and most mammals do.

There are other examples in nature, which I will get into later, of animals which do indeed use some form of gravel, grit, or stone for their food.

They swallow rocks, or small amounts of gravel, after or before eating their actual food in order that the harsh material grinds up the food, since they don’t have chomping jaws.

So, it was thought that birds did this too, partly for this reason but also because birds are often seen scraping their beaks on stone or harsh surfaces.

We’ve come to learn, though, that conures are more than capable of breaking down their food without the help of gravel or grit.

Their beaks can break the food down to an extent, and then their gut can do the rest.

But let’s return to the gizzard.

What is a gizzard?

What is a gizzard?

A gizzard is an internal organ found in a number of non-mammals, such as archosaurs, earthworms, gastropods, some fish, and crustaceans.

It is also found in most birds. Conures certainly have a gizzard, and they also have what’s known as a crop.

These are two anatomical features found in no mammals.

The crop is a lot like the cheek pouches of a hamster.

It serves to store food for later if the conure needs it.

The gizzard is a powerful, muscular organ, with strong walls used for grinding up food. In some animals with a gizzard, the organ still needs the assistance of stones or grit to fully grind up the food.

But conures do not, and their gizzard is perfectly strong enough to grind up and break down the food it eats.

So, your parakeet has a proportionally more powerful stomach than you do, in all likelihood.

We’ve adapted to eat foods that have been cooked, and thus require a great deal less energy to break down—not to mention our relatively strong jaws and teeth.

Firstly, what exactly is cuttlebone?

It’s simply a hard and yet brittle internal structure found in cuttlefish, which is a member of the cephalopod family like octopus and squid.

It has all sorts of uses for human purposes including jewellery making. It’s also good for your conure!

You might find that your conure is spending a lot of energy grinding its beak on its toys or even on the bars of its cage.

This is because your conure’s beak is always growing, like fingernails.

It needs to keep it maintained.

This is where cuttlebone comes in.

Cuttlebones are really high in calcium and make great enrichment for your conure.

More importantly, the harsh, abrasive yet malleable surface will give them the perfect place to maintain their beak.

Stones and grit are too hard, really.

Cuttlebone is the perfect material for them, so ideally you should get them some cuttlebone to stop them wasting energy grinding it down on something that isn’t sufficiently hard.

Can they eat the cuttlebone?

Yes, they can, and they will eat small amounts of it.

As I said, it’s a great source of calcium, as well as just simple enrichment for your conure.

Cuttlebone is pretty easy to find in most pet stores, so it’s a good idea to keep your conure a constant supply of cuttlebone for its beak.

They won’t see it as something to eat perse, but naturally grinding their beak on it will mean they end up eating some of it.

And that’s perfectly safe for them to do as well.

What animals use grit?

So, there are some animals that do use grit to break up their food.

Indeed, some of them are even birds.

Often, the idea for birds is that the stones will remove husks and shells from seeds, so birds like doves use grit since they tend to eat whole seeds and swallow them whole.

Sometimes they can even ingest stones that are as much as 10cm long.

The proper term for these stones is gastroliths, and they have also been found in frog tadpoles and some other amphibians.

So, it’s not at all an uncommon practice.

As I mentioned, it’s also thought that some dinosaurs, including some sauropods, would ingest stones to help with digestion.

Do conures need grit for their beaks?

No, conures don’t need grit for their beaks.

As I said, cuttlebone is your best choice for something for them to grind their beak on.

If you can’t get cuttlebone, some sort of mineral block is the second-best choice.

It will need something to grind its beak on, ideally, but grit won’t do the trick.

It needs to be a solid surface.

Conures do not need grit for any reason.

Why is my conures beak peeling?

Your conure’s beak is made of keratin—again, the same material from which your fingernails grow.

The beak will continue to grow and grow throughout its life, and thus it will eventually start to peel itself off if the bird isn’t grooming it or isn’t able to groom it.

So, your conure’s beak peeling shouldn’t really be a problem, but again, it is better if you have something for them to trim it on in their own time.

An unkempt beak can be uncomfortable for them and can make it harder for them to eat their food.

Do conures need their beaks trimmed?

They do need to trim their beaks, but they don’t need to have them trimmed—they’re more than capable of doing it themselves.

There is really no reason you should be trimming it for them.

If they have something they can always trim it on themselves, like cuttlebone, then there will not be any reason for them to need it trimmed by a third party.

In most things, your conure is quite a smart little animal, and perfectly capable of taking care of its own needs.

Don’t worry about trimming your bird’s beak—just give it something to trim it on itself.

So, in short, your conure definitely does not need grit in their diet.

The prevailing notion was for a long time that parrots used such materials to grind up their food in their stomachs—as indeed many of their dinosaur ancestors did!

But the fact is that they simply don’t need grit for any reason, and in fact it is more than likely to cause issues if they do eat it.