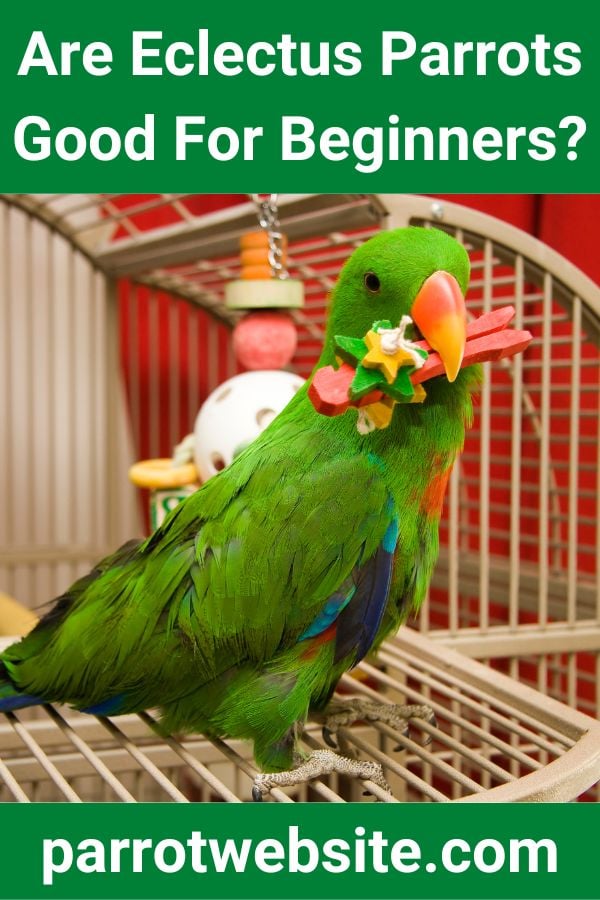 When looking into getting your first parrot, it’s easy to feel overwhelmed by the choices available when it comes to different species.

There are so many to choose from, and knowing which is right for you can feel impossibly hard.

Eclectus parrots are one very popular breed, so are they any good for beginners?

Eclectus parrots are good beginner parrots. They aren’t terribly difficult or prone to bad behavior. That said, owning an Eclectus parrot is still a big commitment, and it’s important you’re fully aware of the duties involved with caring for one. They also are a better fit for quieter households.

Generally speaking, whether a parrot is a good choice for a beginner depends more on you than it does on them.

Eclectus parrots are comparatively low maintenance, docile, and friendly, but if the environment you provide for it isn’t a good fit, then you always run the risk of its behavior being affected.

Are Eclectus parrots good for a first-time owner?

It’s unfortunately not as straightforward a question as you might think.

That said, let me try and answer in the most straightforward way that I can.

Furthermore, parrots of any species are very different from other pets.

It’s not really comparable to any other animal.

It’s vitally important that you spend a great deal of time researching all the responsibilities you’ll need to fulfill as a parrot owner.

Any parrot is a highly intelligent, highly social creature that needs a very specific diet, a lot of stimulation and company, and rather particular day-to-day care in terms of living arrangements and routines.

As parrots go, though, as long as you have a full understanding of the above, Eclectus parrots make great parrots for a first-time owner.

They’re friendly and affectionate, they aren’t overly needy or demanding, don’t tend to be aggressive and they can form deep bonds with their owners.

The other thing, as I mentioned, is just a question of the kind of household you would be bringing them into.

They don’t do very well in particularly loud or rowdy households and prefer quieter homes with maybe one or two family members.

They are okay with children as long as those children understand the importance of boundaries.

Are Eclectus parrots difficult, then?

In relative terms, no, Eclectus parrots are not difficult.

They are among some of the lower maintenance species, and don’t require a lot of extra care that you might expect with something exceptionally large or exceptionally intelligent.

Again, though, it’s all about this question of relativity.

Compared with most parrots, Eclectus parrots certainly are not difficult.

However, parrots on the whole are pretty difficult when compared with other common pets like cats, dogs, rabbits and so on.

Probably the single largest factor to take into account is their social needs.

I’ll go into more detail on this shortly, but parrots are extremely social animals and do not do well spending long periods of time on their own.

This is just as true of Eclectus parrots as it is of any other.

Without proper socialization, they can quickly become bored, frustrated, and ultimately very difficult in a behavioral sense.

This also reflects on the issue of the breeder from which you buy the parrot in the first place.

It’s vital that you find a reputable breeder who is able to properly tame the Eclectus from an early age, otherwise, it may develop problems it can simply never overcome.

They also won’t do well without a nicely varied diet.

On top of the regular feed they get, you should be ensuring they get a variety of fresh fruits and vegetables on the side.

Without this, they can again become bored and frustrated.

Ultimately, though, most of these issues can be resolved fairly easily.

However, I would still suggest that you make sure you are fully aware of everything you need to do to keep them from arising in the first place.

What about aggressive tendencies?

They have little natural tendency towards aggression and territoriality.

Again, though, this is always heavily dependent on a lot of important factors.

Perhaps the most important is early upbringing, as I mentioned.

Parrots are not domesticated animals in the sense that dogs or cats are.

Dogs and cats have been selectively bred behaviorally speaking over the millennia to have the traits we want in them.

While they still need training, they do not need taming.

All parrot chicks must be tamed, and this is a pretty specialized talent.

Without proper taming, an Eclectus parrot that has matured may never be able to suppress its aggressive tendencies.

So, I cannot stress enough the importance of reputable breeders.

If you get your parrot from a reputable breeder and are careful to provide for all its needs, then it should never be aggressive.

Another important thing to consider when owning a parrot for the first time is the noise involved.

All parrots generally make some level of noise.

That said, Eclectus parrots are certainly among the quieter of parrot species.

They don’t tend to make constant noise in the way other species do.

That said, they do have a very distinctive and somewhat loud honking noise which they might make from time to time.

It can be a bit to get used to.

As I said, all parrots are pretty noisy when compared with other pets.

Eclectus parrots sit somewhere in the middle, not making much noise but being reasonably loud when they do.

They will readily and enthusiastically mimic your speech, and even if you make no active attempt to teach them to talk, they may well pick up at least a handful of words or phrases just in the course of listening to you speak.

All parrot individuals are quite different, though, even in the same species.

There’s always a chance that the Eclectus parrot you get is less inclined to talk.

They might choose to mimic other noises they hear.

With a bit of encouragement and positive reinforcement, though, you’ll likely be able to get most Eclectus parrots to talk at least a bit.

Can Eclectus parrots be left alone?

One of the most important parts of a parrot’s care is going to be how much time you’re able to spend with it.

I’ll look at whether it’s better to have one or two in a moment, but for now, can a single Eclectus be left on its own?

For a very short amount of time, yes.

However, I would really advise you should be with your parrot as much as you can if you are only going to get one.

As I said, they are highly social animals, living in large flocks in the wild and often in life-bonded pairs.

If you leave your Eclectus on its own too much, it will get bored and ultimately depressed.

This will lead to aggression and all sorts of difficult behaviors.

Can you own just one Eclectus parrot?

So, should you have just one Eclectus or a pair?

Firstly, I would clarify that if you do want to have a pair, you can’t really hope to introduce them to each other once they’re mature.

They would need to be raised together.

If they are, though, personally, I think this is better for the parrots.

They will have the constant company of their own species, and this will mean they are happier, and you have a lesser burden in taking care of them.

It might sound counter-intuitive that two should be easier to look after than one, but it gives you much greater freedom to leave them alone.

Of course, they still need toys, and you should still take plenty of time to interact with them.

But it will be better for the parrots in the long run if you have a bonded pair.

So, again, whether or not an Eclectus or any given species of parrot is difficult depends almost entirely on you and your own disposition.

Different parrots will be right for different households and people.

That said, Eclectus parrots are among the more friendly and easy to care for of parrot species.

For that reason, for someone who fully understands what they are getting into with owning any parrot, I would say Eclectus parrots make great first-time parrots.