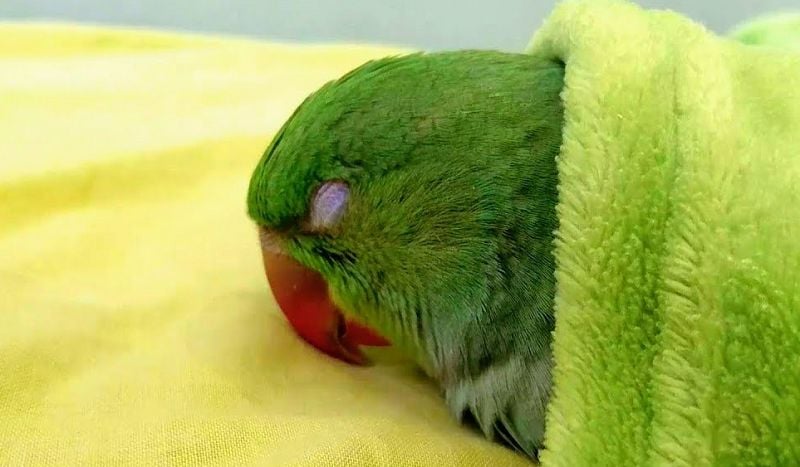 Birds have habits that may appear unusual to us but are completely normal to them. For instance, many pet owners don’t even recognize when their parrot is sleeping because their appearance looks so different from what they expected.

So, how do parrots sleep? Parrots typically sleep with one leg raised and their head tucked into their feathers. However, they may also exhibit different sleeping positions. You can learn more about the parrot’s preferred sleeping positions and its other bedtime habits by reading on.

Parrots Can Sleep in All Kinds of Positions

Your pet parrot can doze off in a wide variety of poses. And yes, some of them will appear very uncomfortable.

A good example of this would be the default sleeping position for many parrots. Many parrots will sleep with their body still upright. They will raise one leg and move it closer to their body then tuck their head under their feathers. Once in that position, a parrot can fall asleep rather quickly.

Depending on their shelter, some parrots may also go to sleep by making their body more compact. They may pack their head and legs tightly into their body before settling into a snug spot.

As it turns out, there are quite a few interesting answers to the question of “how do parrots sleep”.

Uncomfortable as It May Look, Parrots Are Perfectly Fine in Their “Unusual” Sleeping Positions

The mere descriptions of the parrots’ sleeping positions may already make you feel uncomfortable. You may be wondering if those unusual resting positions could have some kind of negative impact on your pet. Rest assured that your pet parrot is perfectly fine.

Let’s first discuss how parrots can stay comfortable while sleeping with one leg up. This kind of position is easy for a parrot to assume because it has special tendons in its legs. After getting into the right position, a parrot can use that tendon to firmly grasp its perch. A parrot can sleep well in that position because it only needs one leg to keep itself stable.

As we discussed above, some parrots also like sleeping upside down. This particular behavior is common among parrots native to Asia.

Instead of worrying about your inverted parrot, you should be glad that it is sleeping that way. Parrots will only sleep upside down if they are feeling healthy and happy. Consider it a compliment from your parrot if it feels comfortable to sleep in that position around you.

Compared to sleeping on one leg or hanging upside down, a parrot tucking its head into its feathers appears relatively normal. Your pet may exhibit this kind of behavior when the weather is chilly. A parrot sleeping in this position is trying to retain its body heat.

Per this article EurekAlert, birds will also tuck their head into their feathers to conserve energy. They can also enjoy deeper sleep that way. If you spot your parrot tucking its head into its feathers, it may just be settling in for a long slumber.

Sleeping with One Eye Open, Gripping Its Perch Tight

Positioning is likely not the only unusual thing that you will notice about your parrot’s sleeping habits. Catch a glimpse of your parrot during its typical sleeping hours and you may see that one of its eyes is still open.

Does this mean that your parrot isn’t sleeping? Interestingly, parrots are capable of sleeping well even if only one of their eyes is closed.

Predators will have a hard time sneaking up on birds that are only half-asleep. The moment a bird senses that a predator is nearby, it can rouse itself from slumber and fly away from danger.

Since your parrot isn’t in any danger inside your home, it doesn’t need to sleep with one eye open anymore. Even so, it may continue to engage in that behavior for a while out of habit.

Sleep Talking Is Not Exclusive to Us

Hearing voices in the middle of the night can be frightening. All kinds of scary possibilities may run through your head while you try to make sense of those strange talking noises. Before you erupt in a full-blown panic, take a second to recall if you have a pet parrot. If you do, there’s a chance that those strange murmurs are coming from them.

Some parrots will make noises while they are asleep. These noises may sound more like grunts rather than actual talking, but telling the difference between the two in the dead of night is not always that easy.

Typically, the vocalizations coming from a sleeping parrot are on the softer side. That said, they may still be loud enough if your parrot is sleeping not too far away from you.

Because of this unusual behavior, some pet owners believe that their parrots dream while they are asleep. We don’t know for certain if parrots do dream, but that could be a possible explanation for this specific habit.

Adequate Sleep Is Essential for Your Pet Parrot

When parrots don’t get enough sleep, you may start to notice them lose some feathers. Those feathers aren’t falling out. Instead, your parrot may be plucking its feathers in a misguided attempt to soothe its anxiety.

Apart from feeling anxious, parrots may also become overly aggressive due to a lack of sleep. They may attempt to bite you or a fellow bird as a result.

Now that we know how important sleep is to parrots, you may be wondering how much rest your pet will need. The answer to that question will depend on the age of your parrot.

Young parrots and those that are already considered seniors will need a lot of sleep. Let them rest for at least 12 hours per day. An adult parrot in good physical condition can do well even with just 10 hours of sleep.

Pet owners need to remember that parrots have their own sleeping habits. You shouldn’t force your parrot to sleep when you are ready for bed. At the same time, you shouldn’t stop your parrot from sleeping if it feels like doing so.

Parrots will decide for themselves how they want to sleep. They may decide to sleep straight through the night or they could take several naps throughout the day.

Do not be alarmed if your parrot’s sleeping habits are changing. You can still be confident that your pet getting enough sleep if it appears physically well.

Can Parrots Sleep Lying Down?

Of the sleeping positions we described in this article, you may have noticed that we didn’t say anything about parrots lying down. That’s because the aforementioned sleeping position is indeed unusual for parrots. The closest you may get to it is seeing your parrot bundled tightly against a comfy corner of its cage.

Do Parrots Need Darkness to Sleep?

Birds like parrots can relax better when their environment is dark and quiet. If you think your parrot is having some trouble sleeping, you can help it out by making its surroundings darker.

Place a cover over the cage and turn off any lights nearby so your parrot’s surroundings are bathed in darkness. Your parrot may doze off not long after that.

Do Parrots Need a Bed?

A parrot can sleep well even if it doesn’t have a bed inside its cage. It may just ignore the bed even if you put one inside the cage. Parrots are perfectly content to use perches for sleeping so expect them to stick to that.

You can also read: