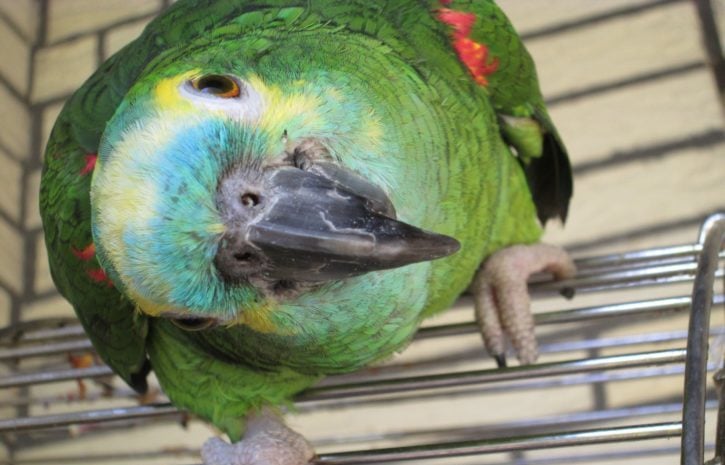 It can be a pain if your parrot suddenly starts saying curse words. You may be thinking how do i stop my parrot from swearing? Especially if you have visitors come around, it can be embarassing and even offensive to some people.

There are actually several different methods that you can use to teach your parrot to stop swearing. Of course, the obvious recommendation is to not teach them in the first place. But if you have adopted a rehomed parrot, this isn’t always possible. The key is to ignore the behaviour and focus on teaching your parrot new words (we’ll talk more about this later).

But this leads us to other types of questions as well. What types of parrots are known for swearing? Why do parrots swear? And how do you teach your parrot new words? Today we will answer all of these questions and more so let’s not waste another minute!

What Types Of Parrots Swear?

Before we dive into why parrots swear, how to prevent it, and how to stop it, why don’t we talk a little bit about the different types of parrots that swear. Any parrot that can talk can learn to swear. But not all parrots talk. So which ones do you need to watch your language around?

The 3 types of parrots that are the most well known for their language abilities are the African Grey, the Amazon, and the Macaw. Each of these parrots can learn an extensive vocabulary. A Macaw, for example, can learn upwards of 100 words. An Amazon Parrot can learn 300 words and an African Grey can learn over 1000 words!

Of course, while these are the most popular speaking parrots, they aren’t the only types of parrots that can speak. Other parrots that have been known to mimic words include Budgies, Quakers, Parakeets, and the Cockatoo (to name just a few).

Why Can Parrots Talk?

There’s only two types of creatures on earth that can talk – humans and parrots. For humans, it’s the structure of our brain that allows us to learn and dictate speech. But why are parrots the only other creature on the planet that can produce the same language as us? It begins with something called the “song system”.

Approximately half of all bird species sing. They use a part of their brain referred to as the “song system” to learn songs from other birds. But within this system is another part referred to as the “inner core”. This is what helps birds learn to mimic sounds. Then there is another part of the system referred to as “the outer core”. While a lot is still unknown about a birds song system, scientists believe that it is this outer core that is responsible for allowing parrots to learn and imitate speech.

But “why” do parrots imitate speech? In the wild, imitation is how parrots learn to fit in with the rest of their flock. Parrots are extremely social creatures, so in an attempt to be part of the social group, they imitate others around them. This is why wild parrots don’t speak, they just make bird noises. But when in captivity, parrots don’t have other birds to learn from. Rather, you become their flock. In return, they learn to imitate you or others in your household in an attempt to fit in.

How do parrots learn to talk and swear?

Parrots will mimic any type of sounds that they are exposed to. They may, for example, mimic the sound of a car horn that they hear outside or the sound of a vacuum cleaner being run. But they will also mimic human speech. After all, what better way to become part of your flock than to talk just like you?

So how do you teach your parrot to talk? It’s all in repetition. If you want to teach your parrot new words, simply repeat them over and over until your parrot picks them up. Remember though, not all parrots talk. And even when it comes to parrots like the Amazon that are known for talking, every parrot has their own personality. This means that some parrots will talk more than others. For this reason, it’s important that you don’t set false expectations for your parrot. They will learn to speak on their own time – if they want to.

When you use the repetition method, it’s up to you which words you choose to teach your parrot. That includes swear words. Some people intentionally teach their parrots to swear because they think it’s funny. This can be very frustrating for new owners if the parrot is ever re-homed.

Other times, parrots simply pick up swear words by listening to conversations. You can think of a parrot like a toddler – they listen to everything even when you don’t think they are. And because they want to be part of your flock, all it takes is one slip of the tongue for your parrot to pick up a new curse word. And once they’ve learned the word, the habit can be difficult to break.

For this reason, prevention is the best option.

How do you stop a parrot from swearing?

As we just mentioned, parrots mimic us to become part of our flock. So if you’re swearing around your parrot, there’s really no way to stop them from copying you. The only way to prevent swearing is to be very careful what you say when your parrot is around. In other words, act like there is a toddler in the room. Remember, all it takes is one slip up for your parrot to catch a new word, so be cautious of what you say and ask others to be cautious around them too.

Unfortunately, this isn’t always in your control. What if you have just adopted a rehomed parrot and it already knows swear words?

The truth is, teaching your parrot to unlearn words can be difficult. Even if you eliminate the word from your vocabulary, your parrot still knows the word. With that being said, over a long period of time, it is possible. The key is to ignore the behavior and introduce them to as many new words as possible. The larger the vocabulary they have to work with, the less likely they will be to continue using a curse word.

Can I discipline my parrot when it swears?

You should not discipline or yell at your parrot when they swear. Firstly, this can damage your relationship with your parrot which can ultimately lead to behavioral issues. Secondly, when you yell at or discipline your parrot, you are giving them attention. And if they key to breaking a bad behavior is ignoring it, then the last thing you want to do is give them attention.

“But it’s not positive attention?” It doesn’t matter. When a parrot is craving attention, they will do anything to get that attention. And unfortunately, swearing is a great way for your parrot to grab your attention (or anyone else’s in the room). Even if that attention is a gasp, a yell, or some other form of negative attention, to your parrot it doesn’t matter – attention is attention. In return, you just want to ignore the behavior completely. Act like they never said a word.

Does a parrot understand what they are saying?

In most cases, yes, it does seem as though a parrot understands what they are saying. Most parrot owners will attest to this fact, but researchers have studied it as well. In one such study it was found that a parrot named Cosmo (an African Grey) changed his vocalizations based on who was present in the room and what they were doing. For example, when his owner was not in the room, he would say things like “I’m here” or “where are you?” When the owner was in the same room he would say things like “I want to play” and “I’m hungry”.

So yes, it seems that parrots do understand what they are saying.

In conclusion, the best way to teach your parrot not to swear is to avoid swearing in front of them. If they already have swear words in their vocabulary, do your best to ignore them and teach them new words. Acknowledging their swearing will just prompt them to do it more but they will hate being ignored.