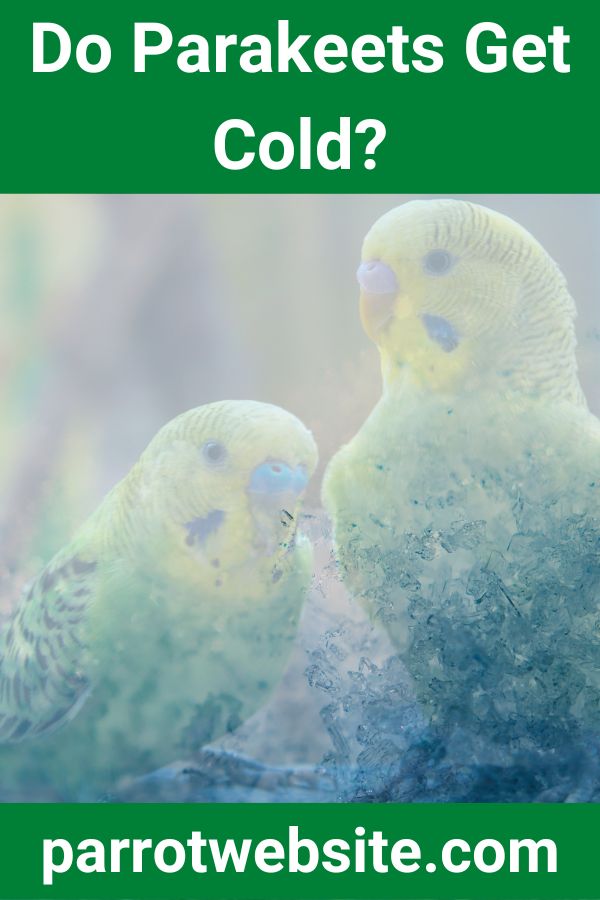 Keeping warm is one of a handful of absolute basic necessities for most living organisms.

Our parrots, virtually without exception, come from some of the most humid and warm habitats on Earth.

So, with that in mind, do parakeets get cold?

Yes, parakeets get cold. They are used to a certain temperature in the wild and you’ll need to emulate that in their home environment. They are generally comfortable at around 70 degrees Fahrenheit, and anything below 40 could be fatal. It’s important to maintain a steady temperature.

So, yes, parakeets definitely do get cold just like anyone else.

They are perhaps more resilient to cold than you might imagine, but ultimately, they are tropical animals and are thus accustomed to tropical temperatures.

At the same time, it’s also important that you don’t get them too warm—exceeding 90 degrees is an equally bad idea.

What temperature is too cold for a parakeet?

Well, let’s first look at where parakeets are native to, to give you an idea of what kind of a climate they are selectively adapted to.

They are found exclusively in Australia, where it is tropically warm more or less across the country—and often year-round.

They tend to inhabit wetland and rainforest, where it is often even hotter due to the humidity.

They generally live in temperatures around 70-85 degrees Fahrenheit, then.

So, for your parakeet at home, you’re going to want to aim for this kind of temperature.

At the very least, it should be 70 degrees Fahrenheit at all times in the room they are in.

You would have to get quite considerably below that for it to be truly intolerable or dangerous for their health, but you want them to be comfortable—not just surviving!

70 degrees is really what you should aim for.

If it’s naturally warmer than that in the summer months where you live, then that won’t be a problem up to a point.

However, much past 86 degrees Fahrenheit, and you may want to consider some air conditioning.

Getting too hot is just as dangerous as getting too cold!

So, with the numbers out of the way—how can you keep your parakeet warm in the colder months?

How can I keep my parakeet warm?

There are a couple of fundamental things you need to do to make sure your bird gets the best chance at staying warm.

Firstly, think about where in the house their cage is.

If it’s somewhere with any considerable draft, this is going to be a problem for them.

It will make it harder for them to stay warm.

So, make sure they aren’t placed near a draft.

Make sure windows are sealed properly, and they aren’t in need of repairs or replacement.

You’ll lose a lot of heat through the edges of windows if they aren’t fitted and sealed properly.

Adding curtains if you don’t have any already is another great way to trap more heat in.

However, the most important thing for keeping your parakeet warm is always going to be heating devices.

They should ideally be kept warm by the same central heating that keeps you warm.

You can also add a personal heater to the bird’s cage. Unless you live somewhere with year-round tropical temperatures, you’re not going to be able to keep the parakeet warm without heating.

You can also add things like warming nests for them to snuggle up in when they are colder and warm up.

All of these things should ideally be done in conjunction.

The room that your bird is, ideally, should never be much below 70 degrees.

Central heating is the best way to do that, and everything else is done for bonus warmth.

How do you know if your parakeet is cold?

There are a number of tell-tale signs you can look out for to know your parakeet may be too cold.

It’s important to be aware of these in case your parakeet needs some extra warmth.

One of the most common things you can look out for is the parakeet putting its head down, tucking its beak into its chest.

They are trying to sort of ball themselves up for warmth.

Since parakeets, and indeed other types of parrots, tend to sleep on one foot, with the other curled up beneath them, a break from this habit can indicate the bird is cold.

If they are sleeping on only one foot, as well as their feathers being puffed up, then this probably means they are cold.

In general, if your parakeet is fluffing up their feathers and becoming ball-like, then the parakeet could be cold.

Unfortunately, though, this behavior can just also mean they’re sleeping, or a few other things.

Just check everything, such as drafts and the thermostat, to make sure they’re just napping and aren’t cold.

Now, in all this, one big question is the difference between day and night.

Do parakeets get cold at night?

Yes, parakeets of course get cold at night.

While their natural environment is, obviously, much colder during the night time, it still really is not cold.

By most human living standards, it’s very warm, and so they will get cold at night if the temperature isn’t warm enough.

Naturally, there’s a simple solution to keeping them warm at night, and that is to simply leave the room heated for them, if at a slightly lower temperature.

This will ensure they won’t get too cold, and they’ll be happy in their room even at night.

However, there is of course the question of the heating bills.

But it’s again all going to depend on where you live.

If you live somewhere very cold, then there’s no question you’ll need to leave the heating on at night for your parakeet.

Cost aside, there’s nothing else for it.

They will get cold, and eventually sick, if they aren’t warm at night.

So, while I would always advise ensuring the room, they are in is at least 70 degrees at all times, there are other things you can do besides central heating to keep them warm at night.

Should I cover my parakeet’s cage at night for warmth?

Many people cover their parakeet’s cages at night, and you may wonder what the argument is for doing this.

On the one hand, germane to our discussion today, is that draping a blanket over the cage will trap more heat inside the cage and keep the parakeet warm.

The other reason is more about light, as it just helps your parakeet maintain a natural rhythm of day and night.

So, yes, I would certainly advise you to cover your parakeet’s cage at night.

This will do more than just keep them warm, too, so it’s a really good habit to get into.

It’s a bad idea to leave small, electronic heating devices on overnight, so I would also get into the habit of turning off any such device at night and not relying on it.

If you were going to do that, then there won’t be a great difference in cost between that and running a gas radiator overnight, which is much safer.

Can parakeets die from the cold?

So, with all that said and done, can the cold actually kill parakeets?

Of course, it can, though as I said it does have to get pretty extreme before you’re at any real risk of the parrot dying.

That does not mean you should be complacent, naturally.

But there’s also no need to panic if you are being responsible.

If the temperature falls below 60 degrees for a sustained period of time, then your parakeet will ultimately succumb to hypothermia.

This will kill them if not treated and is almost certain to cause permanent damage regardless.

So, again, in reality, the likelihood that your parakeet will die from cold temperatures is very low unless you are being actively negligent.

At the same time, keeping them warm can be more difficult and sensitive than many people imagine.

Without doubt, then, extreme cold is a serious risk to your parakeet’s health.

If you don’t keep them warm enough, then it will have a serious adverse effect on their health and could even kill them in the worst extreme.

It’s vitally important that you understand your parakeet’s needs in terms of an internal ‘climate’, so that they are comfortable at all times.