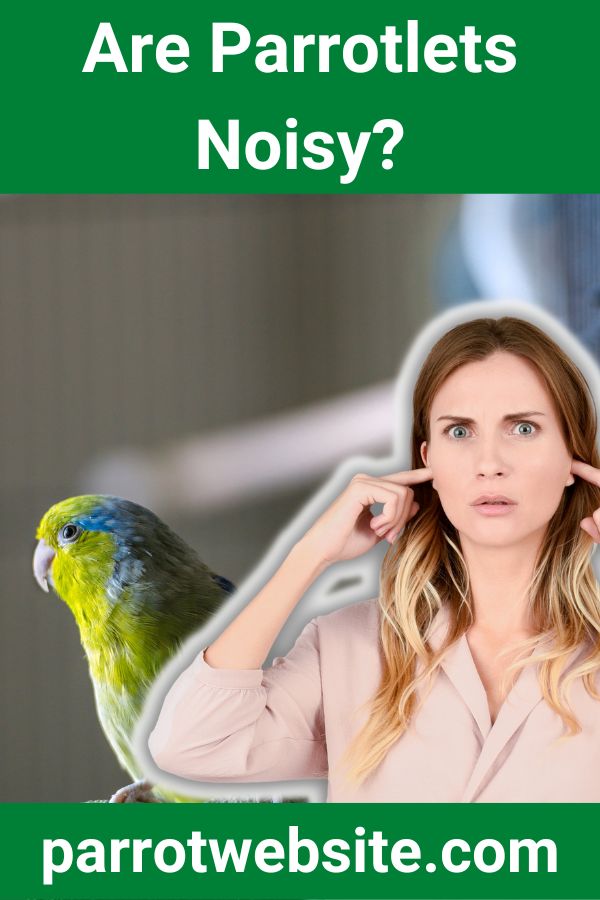 Parrotlets are popular for, among other things, one of their most distinct features—they tiny size.

Contained among the multiple species of parrotlets are the smallest of all domestic parrot species.

With this in mind, then, many wonder one thing—are they noisy?

As parrots go, parrotlets are certainly some of the quieter species. They certainly make less noise than other, bigger parrots. That said, they are still parrots—and parrots, without exception, make noise. They will chirp and sing throughout the day, if not with the great voice of a macaw. So, the answer’s yes and no.

If you want a quiet pet, then realistically even the smallest parrot may not be for you.

They make noise—there’s no getting around that.

If, however, you are comfortable with a bit of noise but you just want a quieter parrot, then a parrotlet may be one of your best choices.

There are two ways of looking at this question.

The first is in general pet terms—are parrotlets loud compared to other pets?

And the simple answer is yes.

All parrot species are loud to a degree, and are going to make a lot more noise, and that a lot more consistently, throughout the day.

They may not have the biggest voices, but they can and will chirp, screech and sing throughout the day.

But the other way to look at it is as compared to other parrot species.

By this metric, parrotlets are the quietest pet you can have.

Parrotlets create, on average, around 65 decibels of noise when they scream, screech, or otherwise make noise.

Quaker parrots, on the other hand, make around 113 decibels of noise.

So, comparatively, parrotlets are the quietest parrots and thus are very quiet pets.

But this is going to depend a lot on your experience with parrots.

Don’t underestimate the amount of noise that even the tiniest parrot can make.

After all, vocalizing in the wild is the number one most important way that these birds communicate with one another.

They can communicate a wide range of things to one another this way, and they need to be loud in order to be heard.

So, yes, parrotlets are loud as far as animals go—if you’ve never had a parrot before, and you’re unsure about how much noise you can handle, be sure to do plenty of research in advance.

They’re quiet, but it’s still even simply too persistent for many people.

Are they noisier at different times of the day?

Are parrotlets loud during the day?

Yes, parrotlets are loud during the day.

This is when they will make most of the noise they make, and they will be active from the early morning until quite late in the day.

Parrotlets are certainly not nocturnal by any stretch, so the daylight hours are where they will be most active in terms of making noise.

Again, it’s all about communication.

In this context, you are the rest of the parrotlets flock or colony that it would otherwise have in the wild.

You are whom it is trying to communicate with when it sings and chirps.

Thus, it does this during the day so because that’s when you are both awake.

It will also be trying to communicate with any other parrotlets you may have with it.

Parrotlets can do well both on their own and in pairs, as long as you spend enough time with it to keep it happy if it doesn’t have a parrot friend.

But whether you have one or two parrotlets will naturally affect how much noise there is.

The noise will be effectively doubled when you have two, as they are constantly chattering away with one another.

So, yes, parrotlets are loud during the day, so don’t go into parrotlet ownership if you aren’t prepared to handle that.

What about at night?

Are parrotlets loud at night?

They will be asleep at night, and as long as all their needs are properly taken care of, they shouldn’t make any considerable noise at night.

They will sleep through the night, and they will make light grinding noises with their beaks, but that is about it.

That said, disturbances through the night can cause them to vocalize and make a lot more noise.

Bedtime for parrots is quite a crucial routine to get them into, and it can seriously disturb them if there is excessive noise or light during the night.

If they are woken up by noise or light, then you can bet they’ll let you know about it!

Keeping them quiet at night should be simple enough, though.

You should drape a blanket over their cage to minimize the light coming in, and give them the illusion of full night time in their natural environment.

Make sure they are away from loud noises that may come from outside, and that they have a regular schedule in terms of what time they go to bed and what time they wake up.

As long as you take good care of them, your parrotlets will not be loud at night.

They will make all their noise during the day, and they’ll sleep through the night to recharge their voices!

How can I make my parrotlet quieter?

If you’ve got an excessively noisy parrotlet, then the likelihood is there is something bothering it.

I do just want to point out again, though, that parrotlets are noisy for animals of their size.

Don’t go into any parrot ownership without understanding what you’re getting into.

They make noise—there’s no training them out of that!

But like I said, they will make excessive noise if their needs are somehow not met.

This could be in any area of their daily life.

They might be not eating enough, or they might simply be bored of the food they’re eating.

Try to change up their diet with snacks and treats.

This will keep them happy and as quiet as possible.

The other reason they might make a lot of noise is simple boredom.

Parrotlets are highly intelligent creatures, and thus they need a great deal of stimulation in order to keep from getting bored.

Make sure to play with them as much as you can, and ensure they have enough toys to play with on their own time.

Finally, we touched on their night time routine earlier.

This is going to be another big factor in getting them to be as quiet as possible.

If they aren’t getting a good night’s sleep then they will be irritable and annoyed, and this will lead to them making a lot more noise.

So, as long as your parrotlet has all its needs met, it will not be too loud.

If you’ve done all this and it’s still too loud for you, then unfortunately you’re just going to have to get used to it!

Are parrotlets quieter than budgies?

What about budgies, then—how do parrotlets compare?

Budgies are one of the other quieter species of parrot, so are they noisier than parrotlets?

The answer is yes, they are, but not by a huge amount.

As I mentioned, parrotlets generally produce around 65 decibels of noise.

Parakeets, or budgies, on the other hand, produce around 68 decibels.

So, as you can see, the difference really is negligible—but they do make slightly less noise.

They may do a little, but certainly not a great deal.

They aren’t the best talkers, and prefer to simply chirp, sing, and screech throughout the day.

Some outliers may become good talkers, and they do possess all the same internal apparatus that allows any parrot to talk.

It’s just that they aren’t really naturally inclined to mimic noises in this way.

They can be trained to an extent, but there’s no guarantee it will work.

They may be noisy, but they just aren’t huge talkers, unfortunately.

So, parrotlets are noisy as far as pets go in general.

As far as parrots, though, they are probably the quietest species of parrot.

So, if you are looking for a quiet parrot, then parrotlets may well be the best choice for you.

They are great at keeping quiet, but they’re also not silent, either, and you’ll be aware of their presence throughout the day.