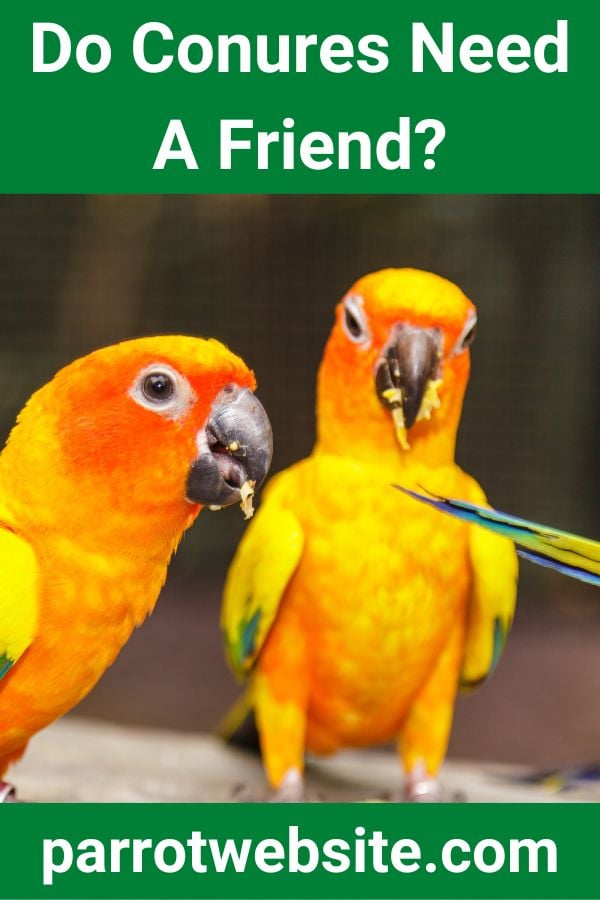 Parrots, pretty much across the board, are highly social creatures.

In the wild, they at the very least mate for life with another parrot if not spending their whole life as part of a large flock.

So, if you’ve got a conure, or are considering one, you may be wondering whether or not they need a friend.

Conures do need a friend, yes. Unless you are able to spend the majority of the hours of the day near them and interacting with them, they will get very bored and lonely on their own. My advice is that it’s always best to have a pair, so they can keep each other happy and entertained.

With virtually any species of parrot, there tends to be debate about whether or not they can be kept alone.

But the fact is that few species are solitary in the wild, and while you can fill the place of a bird companion to a degree, you can’t be there all the time.

Let’s look further into this.

Is it better to have one or two conures?

I should start by saying that this is certainly a matter of relatively fierce debate.

Unsurprisingly, many parrot owners do only have a single conure, and as far as they are concerned it gets by just fine on its own.

But there are a lot, and I mean a lot, of caveats and things to consider with this in mind.

I’ll get into the mechanics of potentially owning a single conure shortly.

Firstly, let’s look at whether it’s better to own two.

My personal opinion is that owning a pair of conures is always best.

When you think about your conure’s environment in your home, you should always try to make everything the best approximation of what it would experience in the wild.

In the wild, most species of conure tend to live in permanent flocks of twenty or more individuals.

They will often mate for life with one of those individuals, so not only do they have their intimate partner, but a wider community, too.

Naturally, domestic conures have all the same instincts and psychological needs as wild conures.

However, they won’t automatically like any other conure you introduce to them. If they grow up solitary and you suddenly introduce a new conure, they probably will not get along.

So, if you’re going to have two conures, it needs to be from the beginning.

They need to be raised together and tamed together, so that they are used to each other.

So, you should have two conures together, ideally—but they also need to have been raised together.

But can you have just one?

Can a conure live alone?

Conures can and do live alone, in the sense that they live without other conure companions.

Many parrot owners do have only a single conure living alone and report no problems with it.

But conures are all highly social creatures.

They’re also highly individual, and thus some might be less social than others, but they are all social.

So, in order to have a conure living on its own, you’re going to need to be prepared to spend a lot of time with it.

Hours out of the day will need to be put aside to play with it and keep it company.

It can keep itself occupied to a degree if it has enough toys and things for enrichment, but this won’t be enough on its own.

So, if you have the spare time to spend hours, every single day, with your conure, then you might be able to get away with it living on its own.

Again, though, many would argue that human companionship is not enough.

Even if you could literally spend every waking hour with it, it would still be happier with other conures to keep it company.

The other point of contention in this matter is that, if you do have more than one conure, they’re more likely to bond with each other than they are to you.

This isn’t really ideal for most of us, of course, but again, you should always put the conure’s welfare first.

Parrots are complex pets, like no others, really, and part of beginning parrot ownership is going to be getting to grips with the realities of it.

It is always my advice that your conure should have a conure friend from the moment you bring it home.

While there’s something of a difference between becoming bonded and liking someone, conures are certainly able to get on well with the whole family.

They will have probably one or two individuals that they are bonded to (if not their parrot companion), but they’ll be able to get on with many people.

So, even if your conure does have a parrot friend, it will still get on really well with you!

Do conures get along with other conures?

They will not get along with any other conure.

Again, the important thing to remember is that conures may live in flocks in the wild, but they’ll be born and raised in those flocks.

The territory is protected by all of them together, from the moment they hatch.

If you try and introduce two mature conures to one another later on in life, chances are they will not only not get along, they’ll actively fight one another.

This is, obviously, far worse than if they were just alone.

So, again, you can’t buy one conure now and then another one later—if you’re going to get two, it has to be from the beginning.

What will happen if a conure lives alone?

What can you actually expect to happen if your conure is alone too much, then?

Well, it will first of all become bored.

Even with enough toys, it will eventually be frustrated that it doesn’t have a companion.

This will lead to all sorts of erratic behavior, like destroying anything it can and ultimately leading to self-harm.

Your conure will be deeply unhappy in the long term if it’s alone too much and will show physical signs of illness from depression.

Some conures will do better than others with being alone, and what I’ve said here is the most extreme eventuality—but it just goes to show exactly why this is something you need to be very careful about.

Can conures live with lovebirds?

Another common question is about whether conures have to have other conure companions or if they can live with other types of parrot.

Can they live with lovebirds, for instance? Well, lovebirds, despite their stature, can be extremely territorial and aggressive to other birds.

Mixing lovebirds and conures generally is not a good idea, and definitely not if they have not gotten used to each other from a young age.

If the two are raised together, then they may well become bonded and get on just fine.

However, this is always a gamble, as lovebirds especially can often become a great deal more aggressive once they mature.

My advice would be not to mix the two. It’s just not worth the risk.

Can conures live with parakeets?

Parakeets are not quite as aggressive as lovebirds, so there’s certainly more potential there for a happy companionship.

However, there isn’t a great deal more potential. And again, the fact is that if they aren’t sensitised to one another from a young age, the chances are they will not be able to get along.

If they are raised together, then they might be able to live together.

Again, though, if you are going to the trouble to ensure they are raised together, my advice would still be just to stick to one species.

I know that many people have their hearts set on multiple species, but it’s just generally not a good idea.

So, as you can see, there is rather a lot of room for debate. Many people do keep conures by themselves, without a friend, and seem to report no issues with that conure.

But there are a great deal of variables that can determine this final result.

Again, my advice is that if you are getting a new conure, you should get two and raise them together.