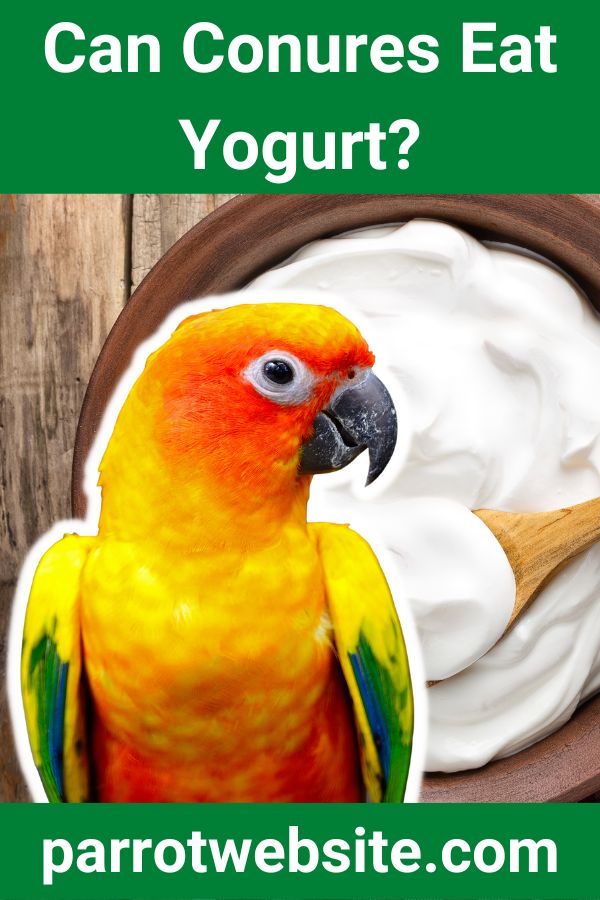 A lot of our breakfasts would be a lot sadder if it weren’t for yogurt.

It’s a great staple, filled with nutritional benefits for us, and incredibly tasty.

We benefit so much from it that it’s natural to wonder if it’s safe for any of our pets, like parrots.

So, can conures eat yogurt?

No, conures cannot eat yogurt. Parrots have very sensitive digestive systems and no ability to break down dairy products of any kind. They are lactose intolerant, and thus yogurt has the potential to be very damaging to them. Don’t give your conure yogurt.

So, though it may be great for us, yogurt is really risky for conures, and won’t do them any good in any case.

There is nothing nutritionally beneficial for them in yogurt, at least nothing that they could not get elsewhere.

And there’s plenty to be concerned about.

Is yogurt good for conures?

Firstly, let’s just view what limited arguments there are for giving yogurt to your conure.

Some suggest that some forms of very plain yogurt actually are okay for conures and birds in general.

Certainly, this kind of yogurt wouldn’t present the same quantity of problems as sugary varieties would.

Some see yogurt in the diet as a good way to improve and increase balance, getting some nutrients into the conure’s diet that they might otherwise miss out on.

While balance is always important to maintain, the simple fact is that conures do not need the same balance that we do.

They have a much more strict, straightforward, and limited diet.

From my point of view, any argument that there are benefits to be gained from yogurt ignore a centrally important point.

There really is nothing for conures in yogurt that they couldn’t get elsewhere.

Whatever benefits you might be able to argue it does have relies on ignoring this point.

So, while you might arguably get some benefits from a few very specific kinds of yogurt, the dangers always outweigh the benefits.

You can get the same nutrition, elsewhere, in a safer package.

The simplest way of looking at it is that they obviously wouldn’t have any access to yogurt in the wild.

Therefore, they shouldn’t have it in your home.

This can be applied to virtually anything and is a very useful rule of thumb.

More specifically, though, the big problem with yogurt, and dairy products in general, is the presence of lactose.

Let’s quickly look at what that is.

Lactose is a special kind of sugar that is only found in mammal milk.

All mammals feed their young on milk from birth, as opposed to hunting for them or even grazing with them.

Every single milk produced by a mammal, including the cattle milk we produce on farms, contains lactose.

When mammals are born, they possess a special enzyme in their gut that is capable of breaking lactose down.

They are entirely dependent on it from an early age, for varying lengths of time.

Once they are no longer dependent on the milk, they gradually stop producing the dedicated enzyme that digests it.

In human beings, this is also true.

We are capable of breaking down lactose up to a point, and in early childhood, we lose that ability.

When we talk about people who are lactose intolerant, what we’re really saying is that they are especially sensitive to lactose.

We are all, in the strictest sense, lactose intolerant.

Our ability to break down lactose is greatly reduced if not eliminated in adulthood—some are just more sensitive to it than others.

Given that conures are not even mammals, you perhaps have an idea where I’m going with this.

Are they lactose intolerant?

Indeed, unlike mammals, they never possess an enzyme capable of processing lactose.

In the wild, parent conures will not feed their chicks on milk, but rather will bring them food directly—usually partially digested and regurgitated into the chick’s mouth.

Thus, for their whole lives, conures are lactose intolerant.

They are never able to break down lactose and digest it for its nutrients.

It’s helpful to put the issue of lactose into context for you to understand just how troublesome lactose can potentially be for your conure.

It’s like if you were to eat some tough leaves you pulled from a tree.

Your body just isn’t equipped to digest it.

So, conures are lactose intolerant—as are virtually all organisms except infant mammals.

So, what can you expect to happen if your conure eats yogurt?

What will happen if a conure eats yogurt?

Well, it won’t be good. In the best-case scenario, nothing will happen.

If you give your conure a very small amount of yogurt, then you may not actually notice any negative effects.

That, however, doesn’t mean there aren’t any—they just might not be visible.

It will almost certainly upset the conure’s stomach.

Normally, conures are quite good at avoiding foods that aren’t good for them.

However, yogurt is so highly sugary could be very attractive to an unsuspecting conure.

So, this is why you need to be extra careful with yogurt.

In the worst case when you give them yogurt, then, it will end up sitting undigested in their gut.

This will lead to pain, cramps, and even diarrhea.

It could lead to serious illness, though this is unlikely, though not worth discounting entirely.

So, while there are certainly worse things that can happen than giving your conure yogurt, it’s plain to see that the risks outweigh any potential benefits.

There just is no reason to give your conure yogurt—so what should you do if it happens by mistake?

What to do if your conure eats yogurt

It depends on how much they ate, but for the most part, you won’t need to do anything.

As I said, if they’ve only eaten a small amount, then it’s unlikely they’ll suffer anything worse than some mild stomach pain.

If they eat a lot, then stay with the conure to check on how it’s doing.

If you think it has eaten a dangerous amount, then you should contact a vet as soon as you can.

They are really the only ones who can do anything about it.

The best thing you can do is stop this from happening in the first place.

Don’t let them have yogurt, and don’t leave it out anywhere they might get at it.

It’s a good habit to keep your conures out of the kitchen, and this should reduce if not eliminate the risk of them eating yogurt.

While the fat content in yogurt is certainly a cause for concern for your conures, it’s really effectively irrelevant since lactose is the bigger problem, anyway.

Whether it’s low-fat or full fat makes no difference to the lactose content, which is the real issue in the first place.

It’s still going to be highly sugary, too, and ultimately undigestible for your conure.

Greek yogurt is one of the most popular kinds of yogurt available, so can conures have that?

The answer, you may not be surprised to learn, is still no.

While Greek yogurt is, in some ways, healthier than other kinds of yogurt, again, it does not address the issue of lactose.

Greek yogurt is also not safe for your conure.

You may be wondering, then, whether they can have a vegan yogurt, since there will be no lactose content.

While you certainly would dodge the issue of lactose, the fact is that vegan yogurt is still a highly processed, sugary food that really has no place in a conure’s diet.

Again, if it couldn’t get it in the wild, then there’s no reason to give it to them in your home.

They can get far healthier and far tastier treats elsewhere, and there’s really no special reason to give them yogurt, ever.

Yogurt is just not a good idea for your conure, then.

While there may be some debate about precisely how bad yogurt is for conures as compared to other dairy products, there’s nothing about yogurt, nutritionally speaking, that you couldn’t get elsewhere in the diet.

Don’t get into the habit of giving processed foods like yogurt to your conure.

They will do just fine with their ordinary feed, as well as fruits and vegetables.