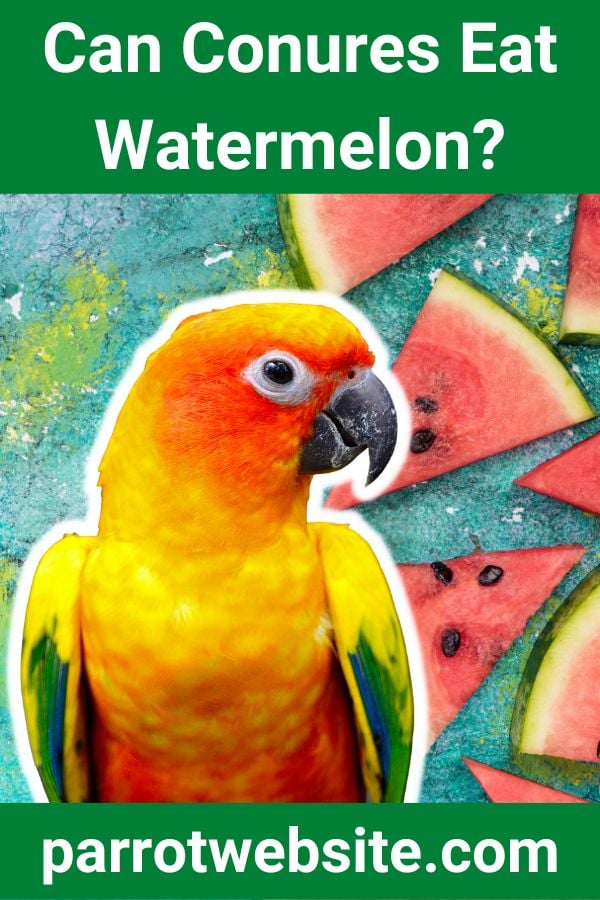 There really are few pleasures equal to a slice of watermelon on a hot summer’s day.

This rich fruit is extremely tasty and nutritious for us, and it’s natural to ask the question: can I share this with my conure?

They are tropical birds, after all, so can conures eat watermelon?

On the next hot day when you’re munching away on a slice of watermelon, then, be sure to get your conure a slice, too.

They will love it, and it comes with all sorts of tangible health benefits that will improve your conure’s quality of life.

Is watermelon good for conures?

Yes, watermelon is great for conures in many ways.

For one thing, don’t underestimate the value of a tasty addition to your conure’s overall menu.

They will get excited about good varieties of treats, and this will boost their overall happiness and mood.

This will then have an effect on their physical health in a very real way.

Beyond that, of course, there are countless specific health benefits to speak of.

For one thing, watermelon is an excellent source of fiber.

Fiber is an absolutely vital element in your conure’s diet.

Watermelon is great for this reason, as are most fresh fruits.

It’s also incredibly low in overall calories because it is about 91% water.

There’s virtually no protein or fat.

This is a good thing in the right amounts, as they can eat more of it without having excessive amounts of fat or protein.

Watermelon does also contain many healthy vitamins, too.

Vitamin C is abundant in watermelon, which is a vital and strong antioxidant.

Antioxidants are another really important part of your conure’s diet.

They prevent the formation of free radicals in the body’s cells, which cause oxidative damage over time.

Watermelon is great for this reason.

It also contains vitamin A in large quantities—or, rather, it contains beta carotene which your conure’s body will metabolize into vitamin A.

They are also rich in a couple of vital minerals.

Potassium is found in good amounts in watermelon, which regulates the flow of fluid in the body’s cells, as well as regulating blood pressure.

Watermelon also contains a lot of copper, which serves a variety of bodily functions.

So, clearly, watermelon is good for your conure in lots of different ways.

But there are always caveats.

Is watermelon bad for conures?

No, watermelon isn’t bad for conures in and of itself.

It’s not dangerous, harmful, or toxic in any way.

There are no short-term dangers of giving watermelon to your conures.

But there are, nonetheless, some important points to keep in mind.

From the conure’s point of view, watermelon is pretty nutrient-rich.

Thus, it really only needs a small amount before it has gotten all the benefits it can from it.

Any more, and it will be over-nourished on the specific nutrients in watermelon.

At the same time, the fact that it is so low in fat and protein can make it sort of like empty calories for your conure, if they eat too much.

Thus, they will be full, but they won’t have eaten all the calories, in terms of fat and protein, that they need.

So, watermelon is very good for your conures, but getting it in the correct amounts can be a bit of a tricky line to walk.

Exactly how much should they eat, then?

How much watermelon can conures eat?

At most, you should give your conures a slice or two of watermelon once a week.

Swap the watermelon out for other treats during the rest of the week.

This makes sure that, one, they aren’t getting sick and fed up with the same old treat, and two, that they are getting the best range of nutrients that they need for a complete diet.

No more than once a week is the perfect amount of watermelon for your conure.

How to prepare watermelon for a conure

Watermelon is soft enough that you can just give your conures a slice and let them pick away at the flesh.

Of course, you will need to slice it—they won’t be able to get through the rind on their own without a great effort.

Other than this, though, that’s really all you need to do.

You can cut it up into chunks if you want, but this might even take some of the fun out of it for them!

Yes, they can eat the flesh, you’ll be relieved to hear!

This is naturally the best part of the fruit, and what they will be most enthusiastic about eating.

Though it is mostly water, too, it’s also where most of the actual nutrition is found.

So, yes, your conures can eat watermelon flesh just fine.

What about the seeds?

They will enjoy eating the seeds as they go through the fruit, and it may even be the first thing they go for when they see it.

Conures do love seeds, after all.

For the most part, though, they will just eat the seeds as they are tearing up the flesh.

They may not even notice.

In any case, the seeds are perfectly safe, and even provide some small benefits to your conures.

Watermelon rind is a lot more edible than you might think.

It’s certainly not the most nutritious part of the fruit, but it’s still good!

It’s likely to be too tough for your conures, but they may enjoy pecking at the white flesh of the rind once they’ve eaten all the red flesh.

It’s rather like cucumber in texture, which conures certainly love.

But, overall, they’re probably just going to ignore it.

They should ideally be full by the time they get to the end of the actual flesh, so they shouldn’t really be all that bothered about eating the rind anyway.

There are countless varieties of watermelon so we could never go through all of them here.

So, let’s look at some of the major subdivisions of watermelon varieties.

Seedless varieties of watermelon were developed in the 1990s for those who didn’t enjoy spitting the seeds out.

They’re a staple of most large grocery stores now, and luckily are perfectly fine for your conure to eat.

Personally, though, I wouldn’t opt for seedless watermelon if I had the choice.

While the flesh is just as nutritious, your conure will love the seeds in a watermelon.

Thus, I would say the best kind of watermelon is going to be a seeded variety.

But if seedless is all you can get, then that too will still be a great treat.

Picnic watermelons are some of the larger commercially available varieties, so named for their ability to feed many people at a picnic.

While you shouldn’t buy a picnic watermelon just for your conure—they will never eat it all!—if you’re buying one for yourself and your family, they can certainly share some.

They will have the beloved seeds and are overall a great choice.

Finally, we have the yellow and orange watermelon varieties.

These can be seedless or seeded, and the flesh is an unusual yellow in color.

They’re certainly a bit harder to come by, so don’t tire yourself out trying to find one.

Your conure will love ordinary watermelon just as much.

If you can get your hands on yellow watermelon, though, they make a great treat for your conure that they will certainly love.

Watermelon is a stellar addition to your conure’s diet, then.

It is packed with health benefits and nutritional goodies, and more importantly, your conure will love eating it.

Moderation is always vital, though, so it’s really important that you don’t give them too much.

The benefits of eating it only need small amounts to be fully realized.

With that in mind, watermelon is great for your conure.