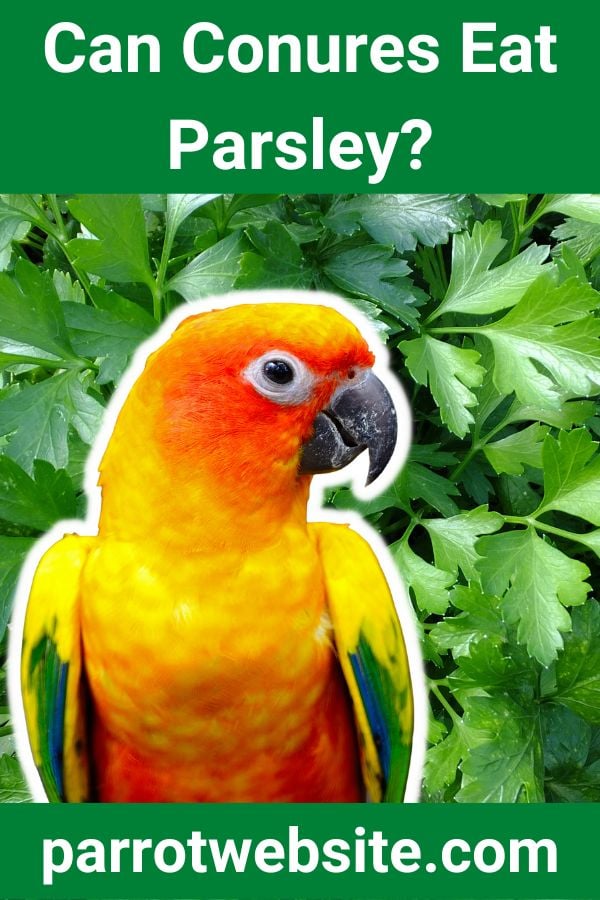 Though not quite as fashionable as it once was, parsley is still a favorite garnish of countless dishes and international cuisines.

It can add fantastic flavor to our own food—but will conures enjoy that same flavor?

Can they eat parsley?

Yes, conures can eat parsley, but it’s minimally beneficial for them to do so. There’s not a whole lot of nutrition in parsley. It also contains trace amounts of oxalic acid, which can be problematic for conures. So, all in all, while parsley is safe, it’s also not tremendously beneficial, either.

We don’t typically eat parsley on its own—as I said, it’s a garnish.

It adds flavor to other dishes.

Conures prefer fruits and vegetables as treats, and their main diet should be taken up by seed.

So, there’s not really much place in that for parsley.

Is parsley good for conures?

Yes, you might say parsley is good for conures in a couple of ways.

If your conure seems to have an appetite for it, then this is always good.

Don’t underestimate the value of treats that they enjoy—it will have a big impact on their mood and, in turn, their bodily health.

Beyond that, parsley is a reasonably good source of fiber.

Fiber is an essential nutrient in a conure’s diet, it’s needed for ensuring digestive health, and keeping everything moving smoothly through the gut in its overall diet.

So, it’s certainly good for that reason.

Particularly vitamins A, C, and K.

Vitamin A, or beta carotene, prevents the slow degradation of vision and prolongs the health of the eyes.

Vitamin C is a powerful antioxidant.

Antioxidants are really important for the prevention of oxidative damage in your conure’s cells.

This occurs when free radicals form in the cells over time, and it leads to all sorts of degenerative issues.

Vitamin K, by far the most abundant vitamin in parsley and the best thing about parsley, is vital for the body’s clotting and aiding in the healing of wounds.

This can be one of the most beneficial aspects of parsley.

Potassium is also important for the health of the blood, as well as the regulation of fluids inside cells.

So, parsley is not without its benefits.

It’s worth noting, however, that your conure would need to eat a pretty large amount of parsley to get the benefits from these nutrients.

It would find them much more easily and in higher concentrations in other foods.

So, with that in mind, is parsley bad for conures?

Is parsley bad for conures?

No, parsley is not bad for conures.

It’s perfectly safe and won’t do them any harm, at least in the short term.

However, if you are relying too heavily on parsley for your conure’s treats, for whatever reason, then there are likely long-term problems you’ll run into.

Though parsley scores fairly low on overall nutritional content, it’s still calories that will fill up your conure.

When it fills on something nutritionally light like parsley, it then won’t get the full range of nutrition it needs, on that day, from other foods.

This can lead to severe nutrient deficiencies.

But if parsley does, as we said, have a range of potential nutritional benefits, how often should they eat it in order to get the full benefit?

How much parsley can conures have?

To be perfectly honest, they don’t need to eat any.

They could get everything and more that is in parsley from other, more nutritionally rich foods, like fruit and veg.

That said, if you do want to feed them parsley, then once a week is plenty.

Give them a very small handful—fresh, if possible.

During the rest of the week, make sure they are getting plenty of fruits and vegetables, on top of their ordinary feed.

Parsley really doesn’t have to be an essential part of this.

Don’t see it that way. just think of parsley as an additional bit of vitamin K in their diet.

Just be sure that your conure is getting all of the variety it needs in its diet.

Can green cheek conures have parsley?

Yes, green cheek conures can have parsley, too.

It is no different for them, everything we’ve already said still applies.

This is true of green cheeks and indeed of any variety of conure.

It makes no real difference!

Yes, your conure can eat the leaves of a parsley plant.

This will be the most beneficial and nutritious part, and they may enjoy the taste.

They also may not, though—this is something you should be prepared for.

Conures can be highly individual and picky, and they may not be bothered about eating it at all.

Given that it’s used to add flavor to our dishes, it is very strong, and this can be off putting for your conure.

In any case, the leaves are where most of the vitamins and fiber are, so they are certainly the best part of the plant to eat.

Again, though, they are only nutritional to a limited degree.

What about the stems?

Yes, your conure can also eat the stems of the parsley plant.

Whether it will want to is another matter entirely.

If you are providing the range and balance in the rest of its treats that we already looked at, then it likely won’t be very interested in parsley stems.

It will seem very boring compared with tasty fruits, vegetables and even seeds.

In any case, though, it can safely eat them for some limited fiber and nutrition.

There is more than one kind of parsley, though—so which are safe for conures?

Flat-leaf parsley is the most common variety that you are probably most familiar with.

As the name suggests, it features broad, flat leaves.

It is the most popular kind of parsley used widely in cooking of all kinds.

It is perfectly safe for your conure and has that vitamin K content that we talked about.

So, yes, your conure can eat flat-leaf parsley.

It’s differentiated by, you guessed it, short, curly leaves.

The taste is very similar with slight variation.

It’s mostly less favored than flat leaf parsley simply because its easier to handle and slice.

Curly parsley simply went out of fashion as it was replaced by flat leaf parsley.

Unsurprisingly, it is also perfectly safe for your conures.

Just don’t give it too much.

All the same caveats still apply.

As the name suggests, this parsley grows in and is native to Japan, as well as parts of China.

It’s a perennial herb, meaning it grows year-round, and comes with a much more bitter flavor than flat or curly parsley in the west.

In fact, the stems are so thick they are even eaten like celery.

For this reason, Japanese parsley may be much better for your conures, as there’s actually some real nutrition to it.

That said, moderation still applies—don’t give your conure too much, as it will still need balance and variety.

The leaves themselves are actually ornamental, looking like ferns and not generally being eaten.

The roots are used in soups and other dishes.

If this, for whatever reason, is something you have regular access to, your conures may enjoy it.

However, it is quite tough so it will be difficult for them to digest.

Parsley can have its place in your conure’s diet, then.

It’s not dangerous or in any way toxic and poses no specific threat to your conure.

It’s just that it’s also only of limited benefit, too, and there are much better and more nutritious snacks you can give to your conure with greater reaching benefits.

Parsley may not be harmful, but it’s not all that special, either.