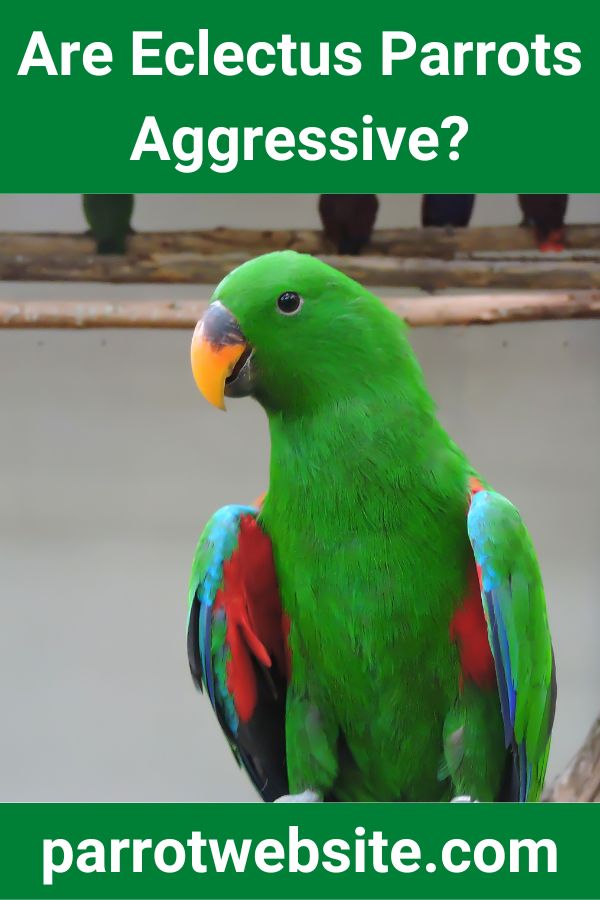 For first-time parrot owners, one of the biggest shocks can often be just how aggressive these little birds can get.

But this varies a great deal between different species of parrot, and where one species might have a real problem with aggression, another might be a really cool cucumber—so what about Eclectus parrots?

Eclectus parrots can get aggressive if their needs are not properly met, but generally speaking, they are among the calmer and more docile of parrot species. They are affectionate and friendly and don’t tend to get overly territorial. That said, care and upbringing are vital to this. Any parrot can turn aggressive if not cared for.

So, Eclectus parrots make great pets when they are well cared for, and you’ve done all the relevant research necessary.

Parrots are often, by their nature, territorial and demanding birds, and so it’s much more about you than it is about them.

If you take the time to learn all you need to know about them, caring for them will be a breeze.

The short answer is yes!

Eclectus parrots are among the most affectionate and docile parrot species, forming deep and friendly bonds with their owners and usually several other people, too.

They are universally described as gentle, friendly, and intelligent birds that love hanging out with people.

Broadly speaking, Eclectus parrots are very friendly—but this can depend a great deal on many factors.

If you’ve never owned a parrot before, then it’s vital you understand what you are getting into.

In part, it is precisely because they are so intelligent that they can be a bit more difficult to care for.

That said, if you are aware of the difficulties involved with keeping parrots generally speaking, then Eclectus parrots in general are very friendly.

But it’s virtually entirely down to you rather than down to the parrot.

I’ll get into the broader elements of their care that can influence their personality and behavior a bit later, but I think the single most important thing is its early life and care.

So, purchasing from reputable buyers who are careful to properly raise the parrot in those crucial early stages is among the most important steps to ensuring a friendly Eclectus parrot.

So, can they be difficult?

Again, the short answer is no, but it still can depend on you.

As I’ve said, parrots in general are relatively high-maintenance pets.

Eclectus parrots are pretty easy to care for in that context but still harder than most other pets.

So, let’s go over all the key things you’ll need to know about caring for an Eclectus parrot.

First of all, let’s look at their social needs.

It’s a constant debate about whether parrots in general and each individual species, should be kept alone or in pairs.

In the wild, Eclectus parrots tend to live in pairs or small flocks.

They are highly social creatures.

So, you’re going to need to spend a great deal of time with them every day if you are only getting a single parrot.

Most of the day, really, you should be available to play or hang out with them.

If you aren’t able to do this, a solitary Eclectus parrot has every chance of becoming aggressive.

They will get lonely, bored, and agitated, even if they have all the toys in the world.

At the same time, if you don’t raise the Eclectus pair or group together, then there’s a very good chance they won’t bond to each other at all and will be instantly aggressive to their new cage mate.

My advice, then, would be to get a pair from the beginning and raise them together.

This will reduce the burden of looking after them—though that might sound counterintuitive.

Intelligent, social animals like this need a vast amount of stimulation, and it will be much less difficult for you if they have a parrot friend to live with.

Generally, though, Eclectus parrots are not difficult as parrots go.

But if their needs aren’t met, they’ll not only be difficult but more than likely aggressive, too.

Why is my Eclectus parrot biting me?

So, what are some of the reasons your Eclectus parrot might be biting you?

Well, one simple reason is that it is getting territorial.

It might simply be a case of introducing boundaries.

If you notice the parrot bites you when you put your hand in its cage, then it might be better to just invite it out of the cage, rather than reaching in.

Otherwise, there could be any number of root causes.

On the one hand, it might not be sleeping properly.

Be sure to introduce a regular bedtime, and you might want to consider keeping a blanket over the cage to keep it dark.

Make sure that once you turn the lights off in its room at night, they stay off and you don’t disturb it.

Make sure your Eclectus is getting plenty of food, as well as a variety of treats and snacks to keep its diet interesting.

Being bored of its diet is another big driver of aggressiveness and biting.

Finally, perhaps the biggest issue as I mentioned is going to be socializing it.

If your Eclectus parrot is on its own, you need to spend as many hours out of the day as you can with it, really.

Make sure it does have plenty of toys for when you’re not around but don’t rely on them to babysit the bird!

If you’ve accounted for all this and it continues to bite, it may be time to visit the vet—there could be an underlying illness or behavioral issue that you can’t diagnose yourself.

An important question when asking whether Eclectus parrots are aggressive is about the differences between males and females.

There are, indeed, key differences between the sexes.

Females tend to be a lot feistier and more aggressive, for a few reasons of basic instinct.

They have to be much more on the defensive than males and tend to protect territory whereas males are more errant.

Males are a lot more docile, then.

That said, either sex should be perfectly docile as long as you account for all their needs.

As I said, Eclectus parrots on the whole are pretty docile compared with other parrot species.

Aggressiveness usually indicates there is a specific problem or problems causing it—it’s unlikely to be in their nature.

How do you punish an Eclectus parrot?

How do you set boundaries with an aggressive Eclectus parrot, then?

Well, the short answer is that punishment is ineffective and will only make the problem worse.

They don’t respond to this kind of behavioral conditioning like dogs do.

They will just come to resent you.

Use positive reinforcement to encourage the behaviors you want.

When your parrot misbehaves, simply end the interaction, indicating to the parrot that this is not what they should do if they want to spend time with you.

Beyond that, no kind of punishment is really necessary, even if they are being aggressive.

Are Eclectus parrots good for beginners?

This is a key question to consider when you are looking to get a parrot.

As I’ve said, parrots are far different from any other pet.

Any species is difficult to own for a first-timer.

It’s all about how you prepare before going ahead and buying the parrot.

The basic answer is yes, Eclectus parrots are good for beginners.

But when things go wrong with parrots, they can go very wrong.

Aggressiveness could arise out of being poorly cared for if you are inexperienced with owning parrots.

However, this could happen equally with virtually any species of parrot.

My key piece of advice, then, is to research, research, and research.

Make sure you have as full as possible a picture of what caring for the parrot will look like before you make any commitments.

As long as you do this and are still happy, then an Eclectus parrot will make a great beginner parrot.

So, all in all, Eclectus parrots are no more inherently aggressive than any other species.

In fact, when properly looked after and cared for, they are especially gentle and affectionate, and can make great, lifelong companions.

But owning a parrot is not like owning any other pet.

They are uniquely demanding and if you don’t meet their needs properly, things can go really wrong really quickly.

With the right care and research, Eclectus parrots are not aggressive.