In the world of humans, raisins are a divisive food item. Some love them, some hate them. Some like them on their own but not as a part of other food and some like them as a part of other food but not on their own. However you look at it, raisins are controversial. But what about parrots? Can parrots eat raisins? Do they even like raisins? All of these questions and more will be answered today.

The answer to this question is yes, parrots can eat raisins. Raisins are good for your parrot and your parrot can eat them with zero adverse health conditions. Raisins are rich in certain nutrients and have plenty of sugars to fuel your parrot’s everyday activities.

However, due to the high levels of sugar in raisins, they are best saved for one or two meals per week rather than feeding them every day.

Below are some facts about raisins including: what they are, what health benefits they have and what potential drawbacks they may bring.

Raisins are essentially dried grapes. These grapes may come from many different parts of the world and depending on how long there are dried for, will be called different things and will look and taste different.

Raisins are a type of grape that has been dried for around three weeks- this is what gives grapes their dark brown color as the grapes darken as they dry. They are many different types of grapes that are used to make raisins, this is how the different varieties of grapes are achieved. However, the most common type of grape used in the US is the Thompson Seedless variety of grape.

When compared to similar dried fruits, such as sultanas and currants, raisins are the largest of the three and will have a soft texture and will be sweet.

What Nutrional Benefits Do Raisins Have For Parrots?

As mentioned above, raisins bring a wide range of nutrients and benefits to the table for your parrot to enjoy. Here are some of the benefits listed below.

Firstly, raisins are high in all types of vitamin B and so will bring your parrot all the benefits you can expect from the vitamin B complex. Benefits such as: cell health, growth and repair of red blood cells and many others.

Raisins are also very high in potassium that have a huge range of benefits. Such as: lowered mortality rate, lower blood pressure and lowered rates of strokes. All of these factors increase with age so if you have an elderly parrot, you may want to consider the addition of a few raisins.

Sugar is something that as humans, can be bad for us. However, it is a valuable source of energy and should not be left out of the diet of your parrot.

Raisins make for a great source of energy, however, because they are so high in sugar, they should only be given to your parrot a couple of times a week alongside nuts and seeds.

How is Best to Feed Your Parrot Raisins?

Raisins are a great addition to your parrot’s diet. They are also cheap and easy to obtain so make for a perfect meal. However, it is not just as simple as adding them into your parrot’s food bowl every day- read below for some tips about how best to utilize raisins.

Are There Any Drawbacks?

However, with that said, there are a couple of drawbacks to raisins and they cannot be fed to your bird without some level of control, here is why.

Raisins have a lot of sugar in them and so provide your bird with a lot of energy. This is fine if you bird undertakes plenty of activity during the day and so requires the energy that you feed it.

However, if, for whatever reason, your bird does not spend much time out of its cage and is not very active, your bird could become fat.

Some parrot species are more prone to gaining weight than others but the potential risk is the same. If your bird is fat, then it will struggle to fly and do other things parrots should do.

Your parrot is also more likely to suffer from certain conditions like heart problems.

These risks are not solely linked to raisins. Any food source that is high in sugar is not good for your parrot and is something that should be given like you would a human- as a treat.

If given the choice, parrots will eat high sugar items because they, like us, enjoy the taste. As a responsible owner, you must not take this as an indicator that they are necessarily good for your bird.

Can Parrots Choke On Raisins?

To truly analyse the risks of raisins it would be wrong to only take into account what is inside the raisin and not the raisin as a whole.

Some foods can be dangerous to parrots because they may choke on them or lack the ability to properly digest them.

Sadly, when it comes to advice on whether something can become a choking hazard, us at Parrot Website cannot give a definitive answer.

A parrot could, in theory, choke on anything as it only takes a small piece of food or foreign object to enter the parrot’s trachea or “go down the wrong hole” for the bird to choke on it.

So, to answer the question directly, parrots can choke on a raisin but it will be rare and there are things that a parrot is far more likely to choke on.

The risk presented by raisins are minimal so you can be assured that they are safe to give your parrot in most circumstances.

What About Raisin Toast? 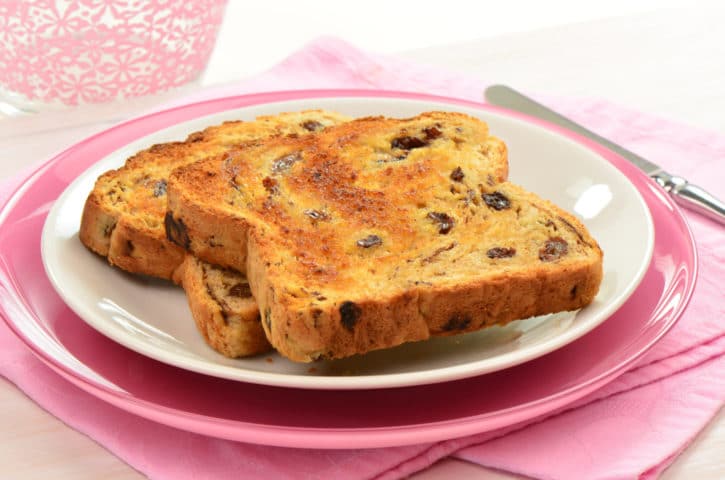 Raisin toast is a fan favorite in the human world and is something that many people bake and eat regularly. However, is it suitable for parrots?

We spoke above about how it is good to keep a parrot interested in its food by giving it a variety of options and changing these options every week. But is raisin toast one such option?

While raisins are ok for a parrot to eat and also carry some health benefits, bread is something that parrots should not be eating regularly.

Unlike raisins, which also have numerous vitamins and minerals, bread only has sugar. This brings up the same issues that raisins have in the sense that they have a high level of sugar.

Therefore, when put together, raisin toast will have a very high level of sugar compared to a relatively low level of nutrients. This makes raisin toast a viable option as a treat to be given very rarely, however, it must be given rarely due to the sugar.

Generally speaking, raisin toast is not the best option for a treat to give to your bird and you are best to just stick with raisins.

Raisins are safe for your parrot to eat and will not poison your parrot, they are also unlikely to choke on the raisins either.

They have B vitamins, minerals and sugar in them to help their heart, blood and body operate healthily.

However, because they have a high level of sugar, they are not suitable to be fed to a bird more than a couple of times a week- any more than this and you run the risk of your bird developing complex health conditions.

Raisin toast is something that should be avoided as well for the same reasons.