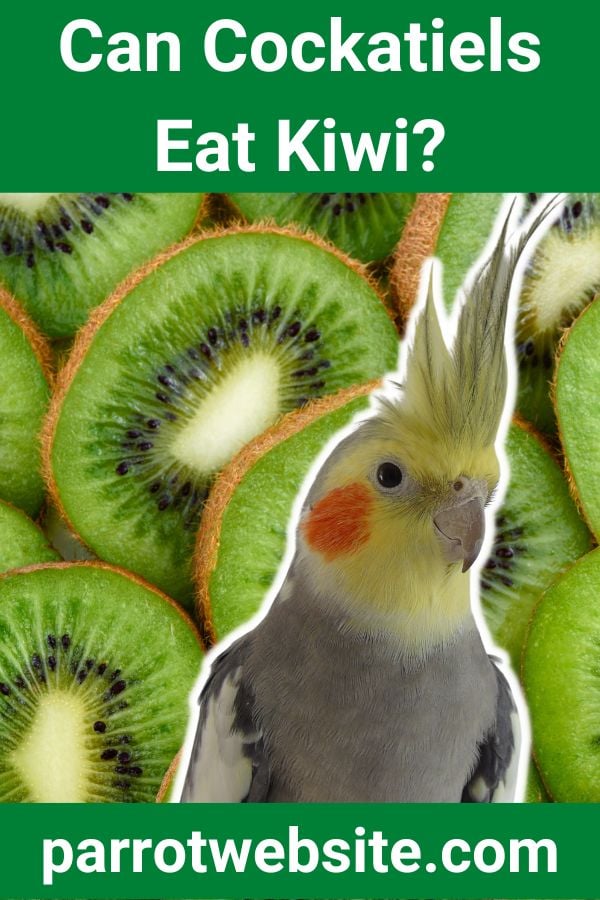 The diet of a cockatiel, overall, is a pretty simple thing.

They generally aren’t terribly fussy as long as you know what to give them.

But providing extra treats and snacks on top of their ordinary diet can get trickier as you go along and try to keep the variety up.

Exotic fruits are always a great choice, so what about kiwi?

Cockatiels can eat kiwi and they will love it. It’s a tasty snack that is also nutritious and will do wonders for their health. However, they are very nutrient rich for a cockatiel, so they only need to eat a small amount. Moderation is the important thing.

It’s perfectly safe for them.

The important thing is that you don’t give them too much and overfeed them on rich kiwi.

Are kiwis good for cockatiels?

Firstly, don’t underestimate the importance of having a good range of treats on your cockatiel’s regular menu.

Kiwis will be a tasty snack that they will love, and this will do wonders for their mood and in turn their physical health.

But there are also many specific benefits of kiwis to speak of, in terms of nutrition.

For one thing, they’re a great source of fiber.

Fiber is one of the most important parts of your cockatiel’s diet.

The fiber in a kiwi will aid in healthy digestion, keeping your cockatiel comfortable after eating.

Kiwis also contain a host of healthy vitamins and minerals which will also be good for your cockatiel’s health.

Vitamin C is a powerful antioxidant, which is essential for preventing oxidative damage to your cockatiel’s cells.

Over time, without adequate protection, free radicals form in the cells, degrading them over time.

This vitamin helps the maintenance of the skin and eyes, as well as many of the body’s natural defenses against illness.

Lastly, kiwis are a great source of vitamin K.

This vitamin aids in the production of proteins that are required for blood clotting, as well as the building of bones.

Now let’s turn to the mineral content of kiwis.

They contain a large amount of copper, which is important for the formation of red blood cells, as well as the health of vessels, nerves, and the immune system.

They are also rich in folate, which is also vital for red blood cell formation, as well as cell growth.

They also contain lesser amounts of potassium and magnesium.

Potassium is important for maintaining the correct levels of fluid inside cells.

Magnesium aids in protein synthesis, and muscle and nerve function, as well as the control of blood pressure and glucose levels.

So, clearly, kiwis are not without their health benefits.

They’re really good for your cockatiel—in the correct moderation.

Are kiwis bad for cockatiels?

No, kiwis are not bad for cockatiels in and of themselves.

They aren’t dangerous, toxic, or poisonous, and you don’t need to worry about giving them to your cockatiel.

That said, there are a number of important caveats to keep in mind.

The most important one is moderation.

Kiwis, as we’ve seen, are incredibly dense in their nutrient content.

Your cockatiel is only a small animal, with a pretty simple diet.

They need limited nutrients, and while they will benefit from a small amount of kiwi, too much can quickly become problematic for them.

If they eat too much, they will quickly have trouble digesting it.

This will lead to diarrhea and stomach pain, among other digestive issues.

It won’t be fatal, and your cockatiel will normally know their own limits, in any case.

They should stop eating before this becomes a problem.

That said, a cockatiel won’t always know the harm that they’re doing to themselves.

If they’re new to kiwi, they may eat too much. So, only eve give them a small amount.

I’ll get into exactly how much later.

Let’s look at the different parts of the kiwi now.

Yes, they can eat kiwi flesh.

Unsurprisingly, this is the best part of the fruit.

It is the most nutritious and healthy, and the part that they will enjoy the most.

This is where most of the nutrition is found, as well as the things that make fruit tasty—mostly glucose and the fruit juices.

Most of the time, cockatiels will just eat the flesh of the kiwi and ignore the rest.

The flesh is more than filling enough, so they won’t need to turn on anything else.

That said, can they eat the skin?

Yes, they can, although they probably won’t be that interested in it.

It’s certainly got some nutrition in there.

Indeed, in many fruits, the skin actually is more nutrient dense than the flesh—although it doesn’t contain the sugar and juices that actually make it attractive to eat.

So, your kiwi will probably ignore it if there is flesh available.

But if they appear to enjoy the skin, then you can certainly let them have at it.

It contains good amounts of vitamins and minerals, so will still be healthy for your cockatiel.

What about the seeds?

Yes, they can. If you know anything about cockatiels, it’s that they love seeds.

They will eat the seeds happily and may even go straight for them as they start eating the flesh.

The seeds are also nutritious, to an extent.

Though they are not quite as nutritious as the flesh, they’re certainly still good.

Again, though, just let them sort it out themselves.

Give them the flesh with the seeds still in, so that they can make their own decisions.

So, now the important question—how much kiwi can they have?

How much kiwi can a cockatiel have?

At most, kiwis should be part of their diet once or twice a week.

Be sure to swap the kiwi out for other treats during the rest of the week.

You want to do two things with their treat menu: keep them from getting bored of the same old things and give them the best balance and range of nutrients.

You won’t be able to do this with any one fruit.

Half a kiwi or so per cockatiel is plenty, whenever you do give them kiwi.

Any more than this and they could start to feel sick.

Can cockatiels eat kiwi every day?

Ideally, no, they shouldn’t really eat kiwi every day.

This would probably constitute an excessive amount of kiwi.

Even if it weren’t nutritionally less beneficial, as I’ve said, they will probably just get bored of it.

One or two days a week is more than enough kiwi.

Does it need to be prepared at all?

How to prepare a kiwi for a cockatiel

There’s not a great deal you need to do, really.

Kiwi is a very soft fruit with soft flesh, so all you need to do is cut it in half, at most.

If you wish, you could try giving them a whole kiwi and seeing how they do with it—breaking into it may be great enrichment for them.

If not, though, just slice it in half and present it to them that way. you don’t need to do any more with it than that.

Of course, there is more than one variety of kiwi.

One of the newer kiwi vines developed to be grown in cooler seasonal climates are the hardy kiwis.

They can even grow in regions with light frosts like in the Pacific Northwest.

These kiwis are hairless but still green, and a lot more tolerant of the cold.

They are perfectly safe for your cockatiel, and just as nutritious.

The other main variety is the more common one—fuzzy kiwis.

These are widely available across the United States in virtually any store.

There are many varieties of fuzzy kiwi—the Hayward is the most common variety.

The Meander is another.

They’re all perfectly safe for your cockatiel and make a great snack that they will love.

There’s no doubt about it, then: kiwi is a great addition to your cockatiel’s diet.

They will love it and it will do wonders for their mood and health.

But overfeeding will be a worse problem than them never getting kiwi in the first place—make sure you don’t give them too much and are sure to get them a good balance and variety in their diet.