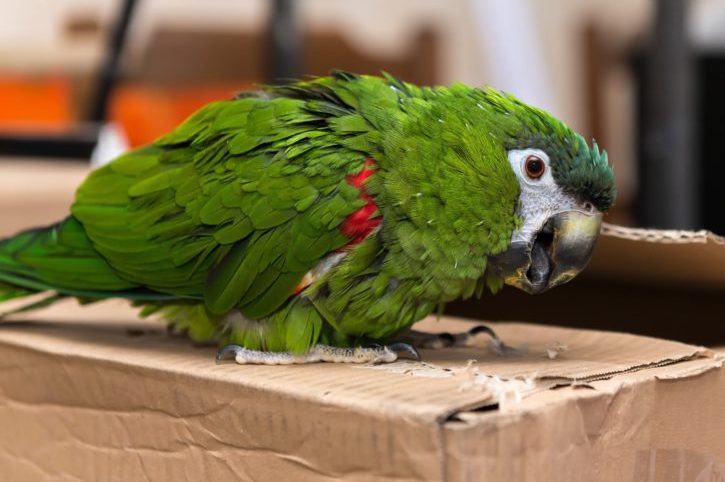 Macaws are perhaps the most identifiable of the parrot species.

Their bright colors and large size make them extremely popular, but like any animal it’s important to do research before you commit to adopting one of these beautiful birds.

One of the most sought-after traits for birds is their ability to talk and that got me wondering if macaws are good talkers?

Yes, macaws are generally good talkers. They are not the most talkative of the parrot kingdom, but they can learn simple words and phrases and they can mimic sounds. They are especially good singers, squawkers, and screechers, with a very loud, clear voice.

Macaws are the largest bird in the parrot family – growing to 40 inches in length.

There are 18 species of macaws, but the most common and most popular are the blue-and-gold macaw, green-winged macaw, hyacinth macaw, and scarlet macaw.

All of these have bright, bold colored feathers that make these birds quite distinct and contribute to their popularity as pets.

If properly cared for, macaws can live for up to 80 years.

In addition to addressing whether macaws are good talkers, this article will outline details about macaws: if they are loud, their personality, if they are good pets for beginners, if they are endangered, and more.

Macaws have an especially loud voice they use to screech.

Sometimes their squawks and screeches can be ear-piercing, which is why macaws are less suitable for people living in apartment buildings or who are sensitive to loud sounds.

Some owners report their macaws spend 5-10 minutes each day squawking.

In the wild, the call of macaws can reportedly be heard from miles away.

Yes, macaws can learn tricks. If you are training your macaw, start with simple tricks like stepping up onto your arm to get them comfortable with socialization.

Training should be done every day but kept to 15-20 minutes.

Macaws respond well to training with food as a tool.

Tricks like waving, climbing onto a stick, or mimicking sounds are all tricks macaws can learn.

Once they are trained macaws enjoy handling.

What is the personality of a macaw?

They bond closely with their owners and can become very affectionate.

Some owners report they can be similar to a dog in their affection and loyalty.

Macaws require a lot of socialization.

It’s recommended that you devote plenty of time each day to spend with your macaw to ensure they are getting the interaction they need.

Without regular interaction, their personality can suffer.

Sometimes called the clowns of the bird kingdom, macaws are very playful and like to joke.

Some owners report their macaws playing their own game of ‘boo,’ lunging at people to see how they react.

Macaws can be quite destructive of their toys so make sure they have plenty of chewable items available like wood or other safe materials.

Are macaws good pets for beginners?

Macaws can be good for beginners if you have the time and space to devote to them, but their need for regular interaction and for space make them more challenging to care for than other birds.

Some recommend you have experience caring for a larger bird before adopting a macaw.

Given their size they also need a larger cage and plenty of toys to chew.

It’s not uncommon for a macaw to go through a toy a week.

They are prolific chewers and if they don’t have something to chew they will find something in your home and likely destroy it.

If you adopt a macaw as a baby, it’s recommended that you hand-feed it for the first six months to develop a relationship with the bird.

With proper care, macaws develop close bonds with their owners.

Macaws can live for decades – make sure you consider the commitment before adopting a macaw.

Are macaws difficult to care for?

Because of their large size, loud voice, and love of chewing, macaws can be harder to care for – at the very least they require a little more time and effort at first.

Macaws need a larger cage and because they tend to destroy their toys, their cage requires regular cleaning.

Macaws crave attention and will require at least an hour a day to play, talk, and be handled.

Regular interaction helps you better understand the personality and preferences of your macaw and become more comfortable with each other.

Macaws’ loud squawking can also be challenging – it’s said to be better to let them screech than try to quiet them.

Do macaws get along with other birds?

They tend to get along with other macaws but can be aggressive with birds of another species and become territorial over their cage.

They need regular one-on-one attention from their owners so if you do try to add a companion make sure your macaw still gets the same amount of time and attention from you.

Yes, there are several species of macaw that are considered endangered, at risk of extinction, or vulnerable.

The International Union for Conservation of Nature lists three species of macaw as critically endangered, including the blue-throated macaw.

The best place to look for a macaw is specialty bird stores or from breeders.

Macaws are also sometimes available for adoption from rescue organizations.

Macaws’ beautiful colors and looks make them one of the most sought-after birds, but they do require a little extra work on the part of an owner.

If given attention and time, they can grow to be great life-long companions.

While macaw’s loudness may make them a challenge, they more than make up for it with their affection and playful attitude.

Make sure to take all of these factors into account before adopting a macaw.