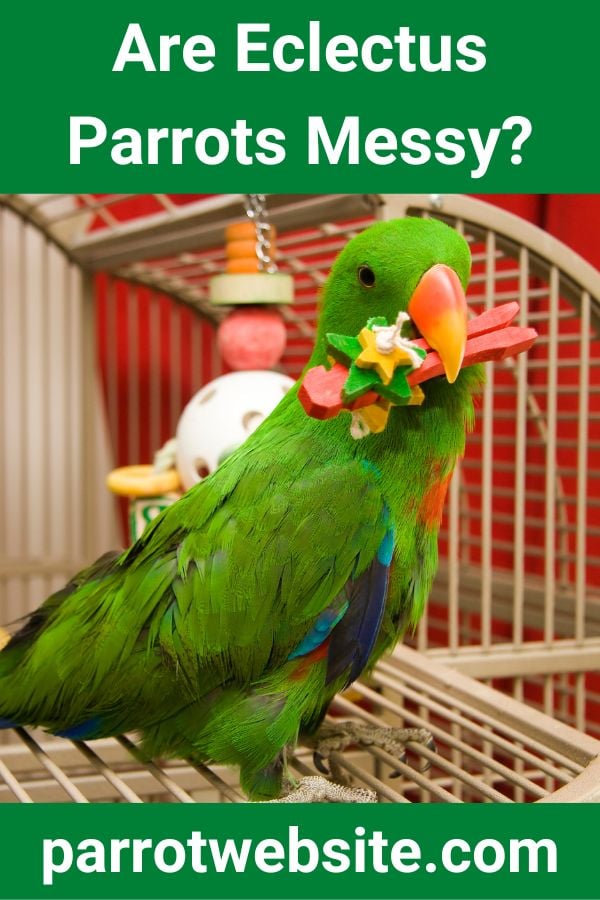 The simple answer is yes, they are very messy. They can toss food all over when they eat, they can poop as often as every fifteen minutes, and they like to leave toys and rubbish strewn around their environment. Owning an Eclectus parrot requires a fair bit of tidying up after them.

In general, parrots are quite messy pets.

They can’t really be housebroken in the same way other pets can, for a couple of reasons, and this makes maintaining a clean and tidy environment for them a bit harder.

If you’re willing to put the work in, of course, it is well worth it.

Do Eclectus parrots make a lot of mess?

This mess will manifest in a few different ways. In terms of general, every day mess, the biggest job is likely to be dealing with its poop.

While they are small animals, this can make it difficult to keep a clean environment if you are, as you should be, letting them have free reign of a room from time to time.

They shouldn’t always be in their cage.

But more on that later.

Other than that, you’ll also have the issue of the mess they make when eating.

Even if it is just their ordinary seed diet, they will likely fling seeds around the room while they are eating, without realizing it.

The other, bigger problem, though, is going to be from the fresh treats you’ll need to give them, such as fruits and vegetables.

These can make a very large mess, as your parrot will again fling bits of the food all over as it eats.

With fruit and vegetable juices, this can get on walls and stain furniture.

There are some ingenious ways around this, though.

You can use small, transparent containers such as large plastic containers, and cut a small door in them.

Then, put the food inside the container.

Your parrot can go inside and eat the fruit in there without spreading the mess everywhere.

Finally, Eclectus parrots need a great deal of stimulation and so they will have a lot of toys.

They will also enjoy playing with pretty much anything they can find.

Tidying up when they are done will be a daily job unless you are happy to simply leave the room in a mess for the parrot.

As long as your Eclectus parrot is well cared for and has all of its needs met, it shouldn’t be destructive.

However, Eclectus as a species are somewhat predisposed to stress.

This stress will lead to destructive behaviors if not managed properly.

They might also rather self-harm than destroy their environment.

Feather plucking is quite common in Eclectus parrots.

Often, the number one cause is a simple lack of socialization and stimulation.

As I said, Eclectus parrots need a great deal of both of these things.

If you plan to have only a single Eclectus parrot, then you’re going to need to spend a great deal of time with it every day.

Without this, or the companionship of another bird, it will get bored, lonely, and destructive quite quickly.

However, if it’s well socialized and is still displaying destructive behavior, there may be something else at play.

If you can’t observe anything obvious about it that may indicate some kind of illness or injury, take it to the vet.

They will be able to tell you for sure what the issue is, and it’s best to know this as soon as possible.

To an extent, though, parrots do just get a kick out of destroying things—having something it can do this with, like even just pieces of paper, can be a great way to direct that energy away from your furniture!

Parrots, on the whole, are quite high maintenance, and Eclectus parrots are no exception.

Even for the most well cared-for Eclectus parrot, cleaning up after it is going to be a daily job.

As I said, you’ll need to be letting them out to have the freedom of a room every day, and during this time, they will poop a lot.

So, you’ll have to be on hand to clean this up.

Not to mention the food mess and toys.

Other than cleaning, though, Eclectus parrots do require a lot of attention, as I’ve touched on.

Though it may seem counter-intuitive, the best way to reduce the amount of time you have to spend maintaining your bird is to get a pair.

You’ll have to do this from the earliest point of its life. If you try and introduce a second bird later on, they will likely not take to one another.

It doesn’t mean you can just leave them to it all day, but it will certainly make things easier on you.

Tidying up might take a bit longer, but you’ll spend a lot less time with them on the whole.

Compared to most other house pets, though, Eclectus parrots certainly are quite high maintenance.

How do you stop an Eclectus parrot from being messy?

The short answer is you can’t.

Eclectus parrots are messy by their nature, and it’s not something you can really help.

I’ve touched on a couple of methods for reducing the mess, but in terms of training them to be less messy, there’s not really anything you can do.

Some Eclectus parrots might take training of this sort on board.

Most, however, will not, though, so there’s not much sense in relying on this.

If you are planning on getting an Eclectus parrot, you should be prepared for it to be very messy.

One of the biggest issues is whether you can potty train them.

How do you potty train an Eclectus?

Again, unfortunately, the short answer is you can’t.

Some might take to some form of “potty training”, but most won’t.

Eclectus parrots tend to poop at least every half an hour, if not every fifteen minutes.

They will just do it where ever they are, so whatever happens, this is going to mean cleaning out their cage every day.

The bigger issue, though, is when they are free to fly around the room.

You should try and set perches in places with newspaper or some other buffer around, so that the parrot is more inclined to hang out in places where mess can be more easily cleaned up.

Some parrot owners say they have successfully trained their parrot to go to a bucket when they need to poop.

Again, though, there’s no guarantee you will successfully train your parrot to do this, so don’t rely on it happening.

Eclectus parrots generally do not smell bad, and do not leave a smell in your house.

That said, it can depend both on their diet and on your own sense of smell.

Some have far more sensitive noses than others.

Many say that Eclectus parrots have a sweet smell, like honey.

The more fresh fruit you feed them, the more likely they are to produce this smell.

Again, though, it really shouldn’t be all that strong.

Changing your bird’s bedding at least once a week is the best bet you have for preventing any bad, lingering odors.

Do Eclectus parrots need to be bathed?

They do need to have a bath, but they will bathe themselves.

They don’t need you to bathe them.

Having a bath is a really essential part of their environment.

They will use it to preen and fluff their feathers, removing any debris that has gotten caught in them.

They will likely make a small mess when using their bath, though.

However, since it’s just water, this is one of the lesser worries you’ll have in terms of mess.

Again, you can just set newspaper or some other buffer underneath it to keep the surrounding area dry.

Eclectus parrots, then, are as messy as any parrot.

Parrots, in general, are very messy pets, and Eclectus parrots may even be especially messy.

This is part of the job!