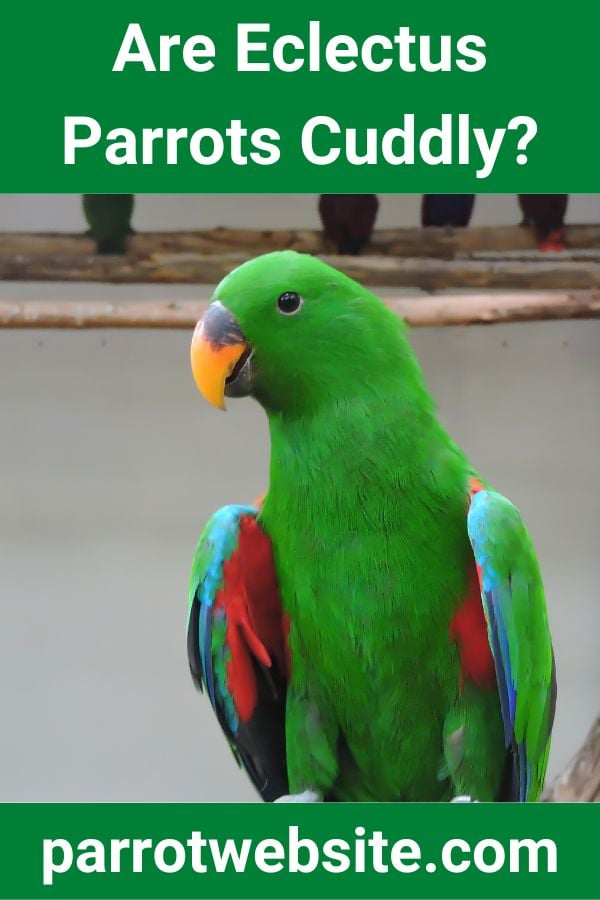 Eclectus parrots are a great breed to own for a whole host of reasons.

They’re one of the most popular in the world, being relatively low maintenance and easy to look after.

One thing that a lot of potential owners are looking for in a new parrot, though, is its inclination for physical affection—so are Eclectus parrots cuddly?

Eclectus parrots are not terribly cuddly, as parrots go. They prefer to be handled only on their own terms and aren’t big on physical interactions. That said, they’re still very friendly and affectionate, they just aren’t much for touch and prolonged close contact. They prefer to just be near you.

So, if what you are looking for in a parrot is that close, cuddly physical kind of affection, then an Eclectus may not be right for you.

Different species of parrot show affection in different ways, so not being cuddly and not particularly enjoying being scratched doesn’t mean Eclectus parrots aren’t affectionate.

It’s just that they aren’t “affectionate” in a particularly cuddly way.

They like to be around you, and be close to you, they will communicate to you through noise and vocalization, but they aren’t terribly fond of physical touch.

Many parrots love this kind of affection and will always encourage these kinds of interactions.

But, again, that doesn’t mean they aren’t affectionate.

It’s just about how to look out for it in different ways.

As I said, Eclectus parrots, though they aren’t especially noisy, are quite proficient talkers.

Mimicking your speech in this way is one very clear sign of their affection.

So, in that sense, you’re part of your parrot’s “family”.

They may even develop what is called a specific contact call for you.

A contact call is a sound used by social animals to indicate various things to other members of their flock or herd, and sometimes even to a specific individual in the flock.

This might, most simply, just be a way of indicating to others where they are.

They’ll also form deep bonds with you, as well, but more on that later.

In any case, Eclectus parrots are definitely affectionate—but what about this question of cuddling?

This is just in their nature—it’s nothing to do with you or your relationship to them!

This is really all it comes down to.

There are different ways of shoring up emotional and social connections to other members of your flock.

Remember, this is really how you ought to think of your relationship to your parrot.

You, to them, are another parrot in their flock—a pretty big one, but a parrot nonetheless!

So, don’t be discouraged by the fact that your Eclectus parrot isn’t fond of physical touch.

It just isn’t their love language.

Another very common kind of physical interaction that parrots tend to like is scratches.

So, do Eclectus parrots enjoy scratching?

Again, generally speaking, no, they don’t.

They just prefer to keep to themselves physically.

It may be that, from time to time, your Eclectus parrot does initiate interactions like this.

In those cases, you can of course cautiously give them the attention they want.

However, this is not going to be very common, if they do it at all.

So, again, I wouldn’t count on it if this is the kind of thing you want out of a parrot.

Eclectus parrots are very unlikely to be fond of this.

In this, though, is an important question.

Behaviorally, there can be pretty significant differences between male and female Eclectus parrots—so does one like to cuddle more than the other?

Of the two sexes, males generally are more docile and easier going.

They are less likely to be aggressive and territorial.

That said, females shouldn’t really be like this either, if properly tamed, raised, and cared for.

Nonetheless, there will still be a noticeable difference in levels of affection as well as interest in physical contact.

But, again, Eclectus parrots on the whole are not big cuddlers.

Males might be more likely to enjoy it, but not by any great margin.

In all likelihood, they still won’t really want to cuddle.

That said, they are going to be a bit more affectionate, however, they show that.

Whether through sounds or through head movements, males might show more affection.

What about the females, then?

Females, for a variety of reasons, tend to be a lot more inclined toward territorial behavior.

They might get aggressive, and boisterous, and they might have a harder time forming a relationship with you.

At the same time, it’s mostly just a simple case of learning and respecting their boundaries.

One common issue you’ll find is that Eclectus females might get hissy or even snappy when you reach into their cage.

This is because they do see their cage as their territory.

This is generally fine, and typical behavior.

Learn to invite them out of their cage by opening it, rather than reaching in.

But, in terms of cuddling, they are really extremely unlikely to have much interest in physical touch at all.

Again, if you are looking for a cuddly parrot, then a female Eclectus is not really going to be right for you.

But bonding with them is still always really important.

How do I bond with my Eclectus parrot?

Bonding with your parrot is something of an art, and can be difficult to get without the proper pointers.

The early interactions are really crucial.

Always be gentle, slow, talk softly, and use a low voice at first.

Beyond that, it’s really just a case of spending as much time with them as you can.

Eclectus parrots are highly social animals, despite not being very cuddly, so it’s important that you take the time to hang out with them.

There really isn’t too much time you could spend with them, so as much as you can is the best chance of forming a deep bond.

Getting toys for the both of you to play with together is a great way to make the interactions more fun.

There are plenty of other things you can do during these interactions, such as offering treats.

Try a variety of different treats over time and you’ll find one that seems to be it’s favorite.

You can use this a lot to form a deeper bond—but don’t overuse it.

Ultimately, though, just be patient.

Bonding with a complex animal like this takes time, and you won’t get any results if you rush.

How do I get my Eclectus parrot to cuddle?

In short, you can’t, and you shouldn’t be thinking of the parrot in this way.

Parrots, and Eclectus parrots especially, are highly intelligent, and they can’t be convinced into getting used to behavior that they don’t like to begin with.

They want things on their own terms, so if it doesn’t want to initiate cuddling or physical contact, there’s really no way you can convince it to.

Parrots are not like other pets in the sense that they are not domesticated.

Each individual is tamed to become a pet.

Thus, many of them still have a highly wild nature.

Eclectus parrots are not, in their nature, even particularly cuddly among themselves in the wild.

This is all it comes down to.

If you want a cuddly parrot, then an Eclectus probably isn’t right for you!

So, you’ve just always got to remember that you need to provide for your bird on their terms, and not just on what you wanted or expected out of the relationship.

Eclectus parrots usually do not like to cuddle in any real sense, and if that’s what you want out of your parrot, then an Eclectus probably just isn’t right for you.

There are plenty of alternatives that will fit your lifestyle much better.