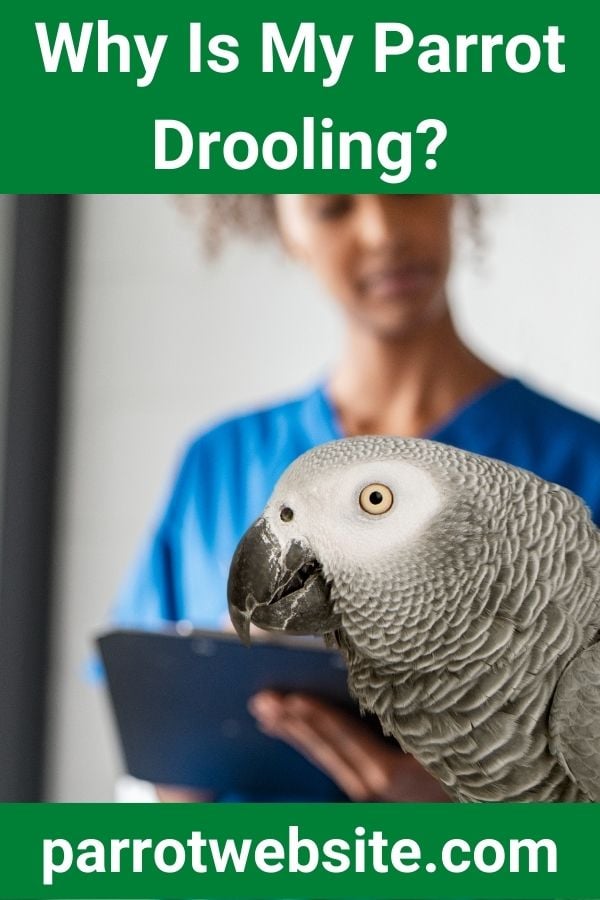 This is a saying that I remember vividly from my elementary school years.

In some odd way, this saying was what you said to a boy when you had a crush on them (I guess it’s the reverse psychology idea).

The reality is, we all drool.

Some of us drool in our sleep, some of us when we get older – and we all drooled when we were babies.

Some dog breeds, like bulldogs, are known for their excessive drooling habits.

But what about our parrots?

And why is my parrot drooling?

First off, let us say that if your bird looks like it is drooling, it’s not actually drooling. Parrots don’t drool. For this reason, it’s not normal for any type of liquid to pool out of your parrots mouth or beak. If your parrot looks like they are drooling, you should take them to the veterinarian immediately. The most common cause of this is something called a canker and it requires immediate attention from an experienced veterinarian.

But what exactly is a canker in parrots and what signs and symptoms should you watch out for?

Today we will answer this question as well as:

And how can you tell if your parrot is ill?

Today we will answer all of these questions and more – so let’s not waste another minute.

Like other animals, parrots have salivary glands and a system of ducts.

With that being said, parrots salivate a little differently than we do because their glands are distributed differently.

In humans, we have hundreds of glands under our tongues that produce saliva.

Parrots are void of these glands.

For this reason, the end of their tongue is usually dry.

Parrots do not drool and if a parrot is drooling there’s more than likely a medical condition behind it.

With that being said, if there is no drool and the tip of the tongue is just wet, it could simply be because they are rubbing other areas of their mouth (that do have salivary glands) with their tongue.

This is a natural type of cleaning behavior for parrots that is not usually of concern.

Still, if this behavior is persistent or exaggerated your parrot could have some type of irritation or inflammation in their mouth.

You should take them to see a veterinarian to have this possibility ruled out.

Other oral behaviors that could suggest irritation include persistent yawning, gaping, and head shaking.

A bird that consistently paws at its mouth with its toes could have some type of irritation as well.

Canker is a type of avian disease that is scientifically referred to as “Trichomoniasis”.

You may hear it more simply referred to as “pigeon canker”, “roup”, “frounce”, or just “canker”.

In parrots, Canker is a type of disease caused by the parasite known as Trichomonas gallinae.

This disease is most commonly seen in budgies and pigeons but can also be common amongst other avian species and parrots that live among them.

The parasite is known to live in the sinuses, throat, mouth, esophagus, and other organs of the parrot (or other bird).

Because this type of parasite requires moisture to survive, it’s most commonly found in parrots that live in warmer climates.

With that being said, it can thrive in the body of a parrot that is in captivity during any time of year.

This type of parasite is transmitted via seed and water but cannot live without moisture.

How do you know if your parrot has Canker?

There are several different symptoms that you can watch for to tell you if your parrot is carrying the parasite Canker.

As per the topic of this article, if your parrot appears to be “drooling”, there is a high likelihood that canker could be the cause.

Other symptoms associated with canker include but are not limited to:

Lesions in the throat (usually yellow, rounded, or raised)

A sudden loss of appetite or weight loss

The inability to close the mouth (due to accumulation of lesions)

Watery eyes (if lesions are located within the sinuses)

Keep in mind that this type of parasite generally causes irritation and ulcerations of your parrot’s crop wall.

It’s also important to note that some parrot’s show no signs of Canker.

Sadly, the disease can be fatal if not caught and treated promptly.

How is Canker treated?

Treatments may vary depending on the recommendations of your veterinarian but most birds can be treated with Ronnivet-S (Ronidazole), Spartix (Carnidazole), or Flagyl (Metronidazol).

Ronnivet-S and Flagyl are generally week long (or more) treatments while Spartix is usually given in a single dose.

Your veterinarian may also suggest re-treatment in the future.

Please be advised that this is not medical advice.

If you think your parrot could have canker it’s important to take them to a veterinarian immediately for a professional and official diagnosis.

Is there any way to prevent Canker?

Because Canker can be deadly to parrots, the best way to treat it is to prevent it.

Prevention for this disease begins with good hygiene.

Always be sure that you clean and scrub your parrots water and food dishes after each meal, and ensure that they are fully dried before placing them back in your parrots cage.

Remember, Canker requires moisture to survive, so if you don’t provide it with a moist area to thrive, it will simply die off.

Because Canker can be transmitted from parrot to parrot (or bird to bird), it’s important that you test and quarantine any other birds before allowing them into your parrot’s space.

You should treat all birds in your care prior to breeding season.

How can I tell if my parrot is ill?

Drooling in parrots is a common sign of the disease Canker.

With that being said, Canker can be present without drooling as a symptom.

In fact, your parrot can carry the disease with little to no symptoms at all.

For this reason, it’s important to play close attention to your parrot’s behavior and watch for anything that seems abnormal.

If your parrot is ill they may:

Puff up their feathers

Pluck at their own feathers

Have a change in droppings (runny, discolored, etc.)

Have dull or poorly preened feathers

Have a crooked beak or crooked toenails

Display signs of aggressiveness (out of the norm)

All of the above are signs that something could be wrong with your parrot.

If you notice any of these symptoms and are concerned, take your parrot to the vet to have them diagnosed.

Yes! Human saliva carries up to 1000 different types of bacteria and some of these bacteria can be harmful to your parrot.

More specifically, your mouth carries a bacteria known as gram-negative.

Parrots don’t have this bacteria in their mouths. And because parrots are not used to this type of bacteria, their immune systems have not learned to defend against it.

For this reason, if this type of bacteria were to enter into your parrots mouth (via a kiss for example), it could become dangerous for your parrot.

Even the smallest amounts of saliva can have a negative impact on your parrot’s health so kissing your parrot should be a no no!

In conclusion, if you notice your parrot “drooling”, you should be concerned.

Parrots don’t actually drool so this type of reaction could be related to the disease known as Canker. Because Canker can be deadly to parrots, it’s important to have your bird seen immediately by a professional.