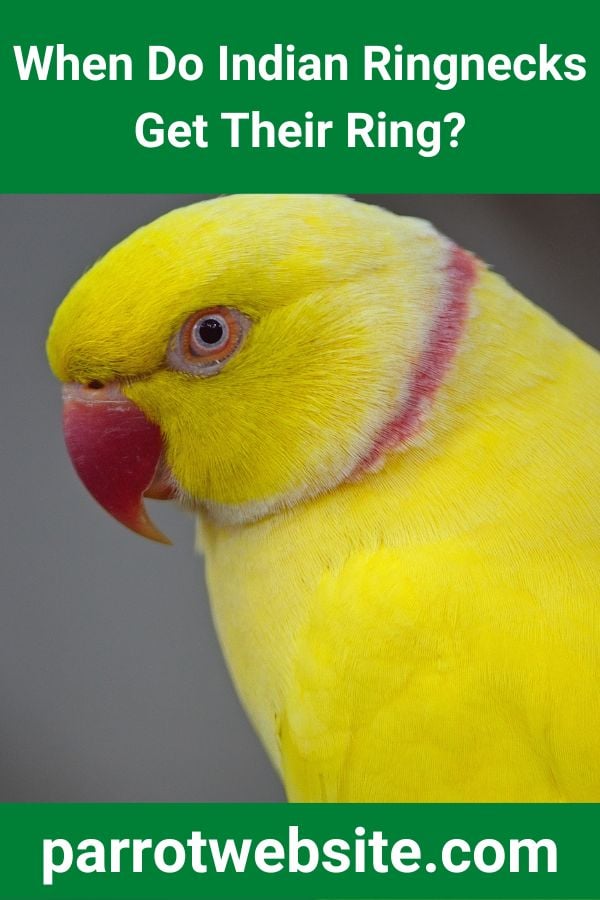 Nomenclature can be at once entirely intuitive and entirely opaque.

With many animals, it’s completely unclear where and why they got their name, and you must look it up—with others, such as the Indian ringneck parrot, the logic is entirely clear for anyone to see. But at what age do ringnecks actually get this ring?

It can vary a lot depending on the individual, but you can expect the rings to be fully formed anywhere from 2-3 years old. They will get their black rings at about 18 months, and their pink and blue rings should appear by age 3 at the latest. In some cases, it can take a little longer.

So, you should really expect an ringnecks rings to be fully formed, in most cases, by age 3.

However, it could be a bit longer than this in some outlier cases.

The development of an Indian ringnecks rings is a really fascinating topic in any case, so let’s look further into this.

When will a ringneck’s rings develop?

So, I would start by saying that there certainly can be a good deal of variation between individuals.

There is no definite, absolute point after which your Indian ringneck will definitely have its rings.

Some will get them very late, some very early. It always depends.

That said, there are certain benchmarks at which you can expect to see some development.

The other important thing to remember is that your Indian ringneck will have multiple rings, and not just one.

Their first ring is their black ring, which will come in first.

At the earliest by around 18 months the black rings will begin to develop, though in some outlier cases they may have it more developed sooner than that.

Next are their blue and pink rings.

These rings usually come in by about 3 years, fully developed.

They will start developing somewhere around the two-year mark, usually, and should in most cases be fully developed by age 3.

Again, in some cases, the rings do not fully develop until the parrot is as old as 4.

It’s in part to do with sexual maturity since the rings are mostly a display to potential mates.

That’s why males have them and females do not.

That said, ringnecks tend to be sexually mature by the time they’re two, so the rings often have to catch up to the maturity in any case.

Do all ringnecks have a ring?

All male ringneck parrots have a ring, yes, but females do not.

Individual ringneck males could, in theory, develop without rings do to factors such as albinism.

However, that’s obviously very unlikely and doesn’t represent a statistically significant portion of the population in any case.

For all intents and purposes, all male Indian ringneck parrots have a ring.

How can I tell the age of my ringneck parrot?

Determining the precise age of a mature parrot can be quite difficult, to say the least.

There are a lot of signs you can look out for early on that will allow you to be a bit more precise, but beyond that point, your parrot will really look more or less the same throughout most of its adult life.

Most parrots have the majority of their feathers and color at the age of 12 weeks or so.

This includes Indian ringnecks, though there is of course one important distinction you can look for: the rings!

As we’ve said, the rings won’t develop until a certain age, so looking at the rings can be a good indicator.

If they’ve no rings at all, but appear physically mature otherwise, they probably are 6 to 18 months old.

Perhaps a bit older but not much. If their colored rings are beginning to come in, they are probably around 2 years old.

With fully developed rings, there’s not much telling how old they are—they could be anywhere from 4 to 40!

Naturally, all of this relies on you trying to tell the age of a male ringneck.

If it’s a female without any rings, there’s not much you can do once they’re a few months old!

A vet may be able to tell you with specialized equipment.

With a baby ringneck, how can you determine the sex?

How do you tell if a baby ringneck is male or female?

So, again, at a certain age, you won’t be able to tell with the naked eye.

You’ll have to wait until they are a bit older to determine by yourself if they are a male or female.

That said, a vet should be able to do a DNA test to figure it out if you’re willing to pay for it.

Other than that, you’ll have to wait until they mature.

The females are usually sexually mature much earlier than males, around 1-2 years.

They will have a light white ring around their necks, and the males will have a black ring.

So, the truth is that you really can’t tell the sex of a “baby” ringneck, without a DNA test.

You can only tell the gender when they’re matured somewhat.

Do male ringneck parrots have a ring?

In fact, they have multiple rings. As I said, they typically have a black ring, a blue ring, and a pink ring.

You might be wondering why they have this ring, though, and the reason the males have it but the females don’t is the key to understanding it.

Sexual dimorphism is the degree to which different sexes of the same species differ morphologically and physiologically.

In many species of birds, there is huge levels of this dimorphism.

In ringneck parrots, it is not quite as pronounced as many other birds, but it’s all there in the ring, nonetheless.

The ring is there, effectively, to entice females to mate. The brighter your ring, the healthier you are likely to be as an individual.

This is the tactic of many sexually dimorphic species to attract mates—develop an appendage or physical feature with no practical or survival application to prove you have the energy to spare developing it.

Of course, this isn’t the conscious thought process of the animals.

It’s natural selection at work. Birds have been enormously successful, so they have to fill more niches to compete, and that also means a greater variety of displays.

Do female Indian ringneck parrots have a ring?

Female ringnecks do have a very faint white ring, but they do not have the same bright colorful ring that you find in the males.

Again, males use this ring to compete for females’ attention—females are the ones who judge the males and decide who they will mate with.

So, they have no need to distinguish themselves.

Females are not going to have trouble mating.

So, females do not have the same pronounced ring that males do.

At what age do ringneck parrots mature?

It depends. Firstly, it depends on how you define mature.

Ringneck parrots tend to be fully sexually mature by around 18 months to 2 years in females, and up to 3 years old in males.

However, in the wild, they don’t live with their parents for anything like that long—so you might say that is the point at which they are mature.

This is generally by around 6 months to a year.

Females, as I said, also tend to mature at lot earlier than the males.

So, there’s a lot of room for debate on this.

Basic anatomical maturity will be achieved by at most a year old, but breeding is an important benchmark in this.

What age do female ringnecks breed?

So, as I said, females are often sexually mature by the time they’re around 2 years old.

However, most would not think it prudent to try and breed a ringneck at such a young age, and so they aren’t often bred until they’re around 3 at least.

Maturity is certainly a complex question, then!

The lifetime of a ringneck parrot is long, and though the development of the rings can seem to take a long time, it’s ultimately not that long in the course of their whole lives.

In any case, tracking the development of something like this can be really interesting, especially the first time.

There’s often not really anything comparable in other pets that takes this long to develop, so be patient and there will be a great show on!