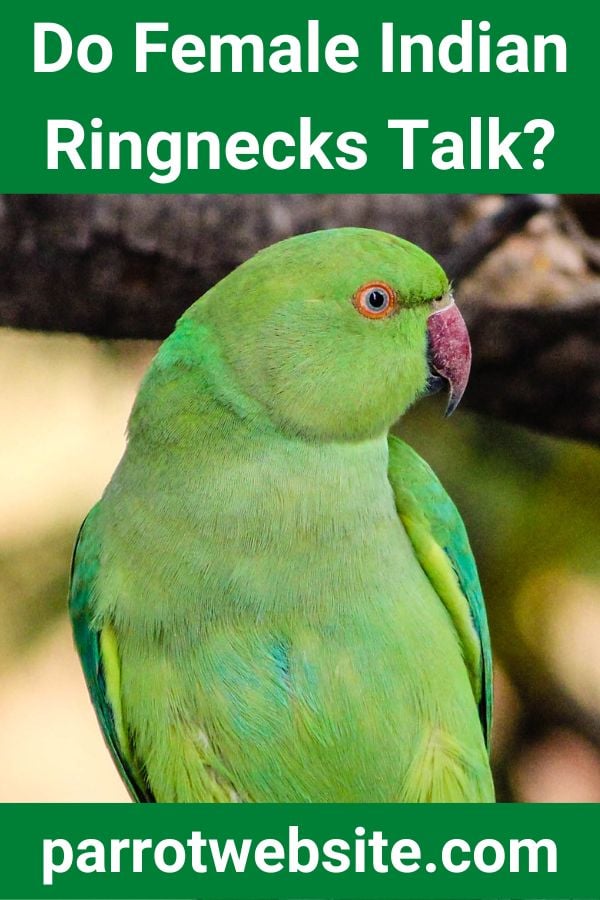 For a lot of us, there’s one single most important question when it comes to a particular breed of parrot—can it talk?

And if so, what about the females?

Indian ringnecks are a species prized for their beautiful plumage and friendly, inquisitive temperaments.

But can Indian ringneck females talk?

Yes, they can, and quite well! Indian ringnecks are well known as chatty parrots who can master a wide vocabulary of words and phrases. The females are no different from the males in this regard and are just as adept at talking as they are.

So, female Indian ringnecks can talk, and most will begin to over the course of their development even without too much encouragement.

However, parrots are highly individual, and some female Indian ringnecks are going to be bigger talkers than others.

By and large, though, they will talk to a pretty impressive degree.

Do all female Indian ringnecks talk?

All female Indian ringneck parrots certainly have the ability to talk.

Whether or not every single individual female ringneck will talk, and to the same degree, is a different question entirely.

There are certain things we can say for certain about the behavior of a given species of parrot.

We know that female ringnecks, like all other parrots, are going to make a lot of noise one way or another.

In all likelihood, your female Indian ringneck will be a great talker.

The species is known for being talented talkers, and this is true of both the males and the females.

It will do you well to give them a little encouragement, but more on how to do that shortly.

I would add, though, that parrots as I say are highly individual, and the temperaments of any two given individuals in the same species could differ quite drastically.

Thus, there is a chance, however slight, that you might end up with a less talkative female ringneck.

So, the more accurate answer is that no, not all female Indian ringnecks talk. However, the number that don’t is really very small.

A bigger question is which are better talkers—the males or the females?

In general, the males are going to be better talkers than the females.

There are a few reasons for this, but it’s worth noting that it’s very often the case in not only parrot but bird species in general that the males make a lot more noise than the females, if the females make any at all.

While female Indian ringnecks do talk and make noise, they make a lot less noise than their male counterparts.

One of the main reasons for this is territory.

Males lay down and protect territory in ways that females do not quite do in the same manner.

They tend to be more errant and less static unless they are shacked up with a male.

Males are the ones who need to establish territory in which to attract a mate—females do not do this.

Once they’ve established that territory, then they need to use their impressive singing and mimicking abilities to attract a female.

Males, then, are naturally “better” talkers in the sense that they are more inclined to talk and to mimic speech.

Females and males both have exactly the same capacity and ability to speak, more or less. Males are just instinctively more inclined to do so.

Do females need to be trained to talk, then?

Can you train a female Indian ringneck to talk?

Getting any parrot to talk is going to require a bit of “training,” in one sense or another.

While they are certainly more inclined to mimic the noises that their human companions make, they may just as well mimic beeping from around the house, sirens, or any other noise they happen to hear on a regular basis.

So, what will the training involve for a female Indian ringneck?

The first point is that you need to get started as early as you can in the parrot’s development.

Positive reinforcement is a tried and tested method and will work really well here.

A clicker is a good tool to have, along with some treats. All you really need to do is spend time each day loudly and clearly speaking any phrases you might want it to pick up.

When it says what you want, click the clicker, and give the ringneck a treat.

This is the simplest and most reliable method. Once you get the parrot used to the idea that talking is something you want it to do, it will begin to naturally start mimicking you.

Another important question, particularly for the training process, is when they will start talking.

Female Indian ringnecks are generally quick learners, and they will usually start talking around the eight-month mark at the earliest.

Some may start a bit later, but it shouldn’t be much later than one year.

This is when you will begin to hear them actually start mimicking speech.

However, this is really the most important time to continue talking with them every day.

Don’t get complacent when they start talking and expect them to just figure the rest out on their own.

This is the most crucial stage of training.

Talking to them every day once they start talking is going to make sure that they continue to develop their ability to talk.

By the time they are two or three years old, their ability to talk is more or less fully developed.

That’s not to say they will not pick up any new words or phrases from there on. But from this point they’ll be able to learn numerous complex words and phrases.

But is there anything you can do if your Indian ringneck female just isn’t talking?

What to do if your female Indian ringneck doesn’t talk

If your female Indian ringneck hasn’t been responding to training and just hasn’t seemed to want to talk, then there’s frankly not a lot you can do.

You can’t make it talk if it doesn’t want to.

That said, even if it’s not talking, it should be making noise of some kind or another.

If it isn’t making any noise whatsoever, that’s cause for a visit to the vet.

There may be something wrong.

But if your female Indian ringneck is making a lot of chirping and singing and otherwise mimicking noises, then there’s likely nothing wrong. It just isn’t much of a talker.

I should stress, though, that this eventuality is quite unlikely.

As I said, most ringnecks will pick up speech mimicry to some degree.

It’s always worth persevering with attempts to train them to talk—even quite late into development, they may still pick up speech.

Why do parrots speak in the first place, then?

Why do parrots talk?

Parrots talk as a way of deepening their bond with us.

Mimicking the noises we make is a way of communicating with us on our own terms, since birds and parrots especially are highly vocal communicators.

It’s a way of relating to us and a way for them to feel as though they are part of the ‘flock’.

As I said, males also employ mimicry as a way of impressing females.

So, this is part of why they spend their whole lives developing and honing the skill.

When you can mimic better than competing males, females are more likely to choose you since you seem to be stronger and healthier with a bigger voice and greater mimicking talent.

So, you can see why, even though they do still talk, females are much less inclined to talk.

They don’t need to attract a mate—it is always the males who are picked by the females.

They might not be quite as good as their male counterparts, but the right female Indian ringneck will be a really chatty piece of work.

If talking is really what’s most important to you, then it might be worth considering a male instead, but overall, the difference is only going to be very slight in most cases.